Jennica Garcia went on a mission to save lives in Rizal and Marikina during Typhoon Ulysses. 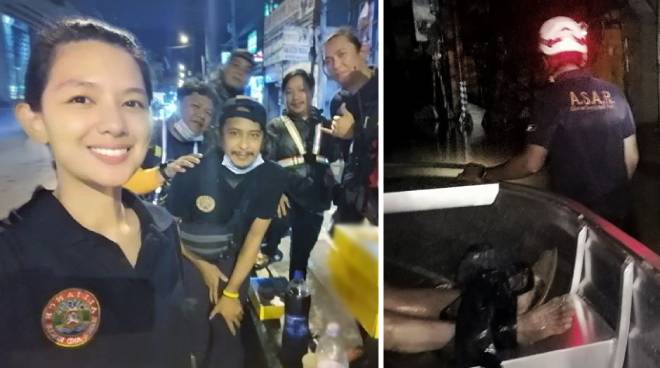 Jennica Garcia took to social media to share how she and a team of rescuers retrieved a lifeless body during the onslaught of Typhoon Ulysses.

The daughter of veteran actress Jean Garcia braved the strong winds and roof-high waters together with members of a non-profit organization called Alliance Search and Rescue Group. They went on a mission to save lives in Rizal and Marikina, two of the most heavily hit areas in Mega Manila.

While they managed to save several lives, the 30-year-old actress revealed that they also retrieved a lifeless body of a homeless person identified as Manang Terry in one of the barangays in Marikina.

But since they didn’t have enough equipment to transport the body faster, they improvised using whatever resources they had at hand and paddled as hard as they could until the cadaver reached the land.

“We didn't have a stretcher and other equipment needed to transport her to land at that exact moment. May alon kaya hindi na namin kinayang balikan ang mga gamit. We had to improvise to get her inside our boat. Ang bangka na gamit namin ay hiram lamang at hindi de-motor. Sinagwan namin ito at itinutulak hangga’t kaya pag ang tubig ay mas mababa sa aming dibdib,” she said.

In a separate post, Jennica thanked everyone who provided her and her team with food and everyone else who provided them with sources of strength throughout the entire mission.

As they continued with their rescue operations, Jennica asked for prayers for everyone who got affected by the typhoon.

Jennica is the wife of actor Alwyn Uytingco.