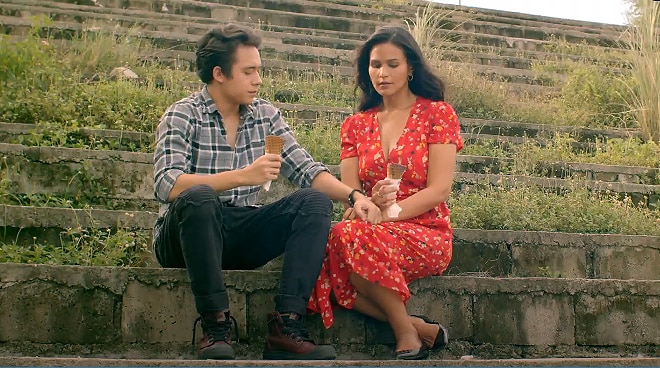 The series, about a married woman who starts an affair with a younger man, will be available to stream on iWant TFC starting Wednesday, November 18.

It is directed by Gerardo Calagui and produced by Epic Media.

Iza and Jameson previously worked together on the ABS-CBN drama Ngayon at Kailanman.

In an interview with Inquirer, Iza revealed that she and Jameson underwent a sensuality workshop in preparation for Loving Emily. They also watched Call Me By Your Name, a coming-of-age drama of 17-year-old Elio and 24-year-old graduate student Oliver falling in love, according to the actress.

"I’ve always found Jameson very boyish. That was difficult for me. When I look at him, I don’t see a man. In my mind, I would say, ‘Ang bata nito! Para naman n’ya akong nanay.’ It was helpful for me to watch the film because I was able to visualize that, ‘Hey, this could work!’" said Iza, who added that they shot the series in Tuguegarao.

She described her love scenes with Jameson in Loving Emily as "intense."

"When I saw the trailer, I thought, ‘May laban!’ We didn’t have the love scene inside the bathroom, but we did it on the beach," said Iza.

The actress, however, clarified that the scenes did not involve frontal nudity.

“I also had to do love scenes with Epy (Quizon), and ours were different because we play husband and wife here. It was an interesting ride," she added.

When asked how it was like to have kissed both Jameson and Epy, Iza said: "It’s the same as when I kissed Piolo Pascual, Max Eigenmann or whoever. It’s just work. I’m supposed to feel for the story. That’s it!"