WATCH: Xian Lim gives a tour of his house for the first time

Xian Lim gave fans a glimpse of his home of ten years. 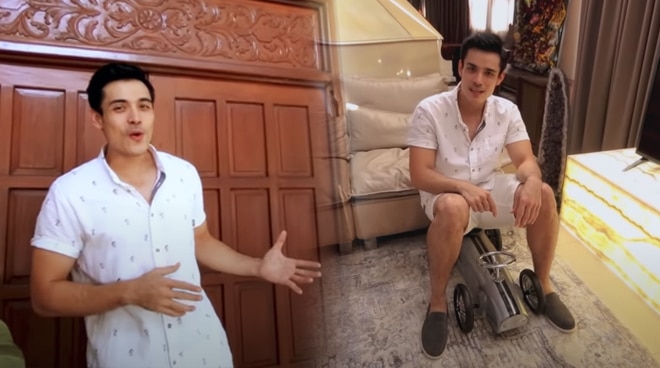 Kapamilya actor Xian Lim gave a tour of his home for ten years.

According to tge actor, the house was built in the 80s. And when he moved in ten years ago, he decided not to make drastic changes with the structure of the house except for the ceiling which he had to renovate to make it look more open and spacious.

Xian, who decided to add accents and designs varying from modern to eclectic to industrial, said he likes to mix things up instead of sticking to just one design.

“Another huge help by the interior designers when they came by the house was they helped me fix this place up kasi sabi ko nga, I wanted an area to be able to chill,” he said of his “chill place which can be found in the attic of his house.

It's really a struggle for an introvert to open up and let people in our tiny circle but I'm really happy to share my space with all you guys this evening😄 If you haven't seen my house tour, be sure to click the link in my bio😄👍 . Huge thanks again to @taylorlivingph for helping me rearrrange the furniture and giving me design tips and tricks to better have a cozy living space ❤️

Xian also showed the part of his house which he described as one of his favorites for its “old feels” brought by the design which he also retained upon moving in.

A known fitness buff, he also showed his home gym complete with equipment, which can be found by the poolside. He also gave fans a glimpse of his art and musical instruments collection in the vlog.

In the same vlog, Xian also showed the area of his house which he dedicated to the clown collection of her grandmother. He previously showed it to his fans through a post in the past.

Wish granted for my lola ❤️ She is now recovering and we're waiting for the doctors to give a go signal for her Chemotherapy. Before we brought her to the hospital, I asked her what she wanted para mapabilis ang balik ng lakas niya and she told me that she wanted to see her clown collection in one place. This is the final product and she was thilled and excited to see it all on display❤️😊🎭🎪🤹‍♀️ @mommymaryanne . Thank you @macglasscabinet for the quick installation! Sorry for the rush but you guys delivered right on time before she arrived from the hospital 😄😄😄 Sobrang ganda ng quality! ❤️❤️❤️ . My lolas next wishlist for me is to frame all her cross stich😅😅😅.....All 150+ works that accumulated through the years! Mukhang kakayanin naman 😅❤️

Xian added: “So sabi ko parang it will be nice na after her operation, pagkabalik niya makikita niya she was really surprised. And she was so happy that’s why I leave the lights on every single day.”

Towards the end of the vlog, Xian also showed the interiors of his van which he said the place he spends most of his time especially during taping.

“I spent more time sa loob ng sasakyan na ito kesa dito sa bahay kasi ito talaga ‘yung pangtrabaho ko eh. So buksan lang natin. And this car has been with me for so long. This is the first car na nabili ko ever since I started getting work,” he said.

Xian promised to do another vlog to show the other parts of his house.