WATCH: Bea Alonzo does “sugar skull” makeup on her own

Bea Alonzo transformed into a calavera for Halloween this year. 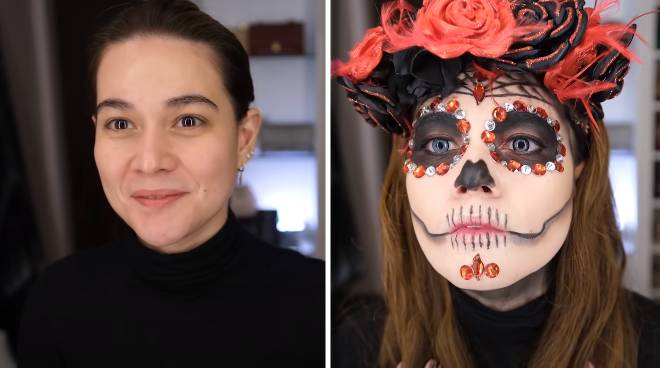 Bea Alonzo recreated the calavera or “sugar skull” look she did three years ago for her latest makeup tutorial vlog.

Since most people are forced to stay indoors due to the pandemic, Bea decided to share a much easier way of achieving a scary look at home.

Have you decided on what Halloween costume to wear yet? If you haven’t, here’s an easy way to impress your friends at your video chat party! Bea Does Halloween Make-up vlog is now up! Link in my bio 👻 . . #ByBea #lifeisbeautiful

“I don’t know about you. But ako, I love to dress up during Halloween, I would always, always throw parties for my friends. Sometimes, I would even travel for Halloween. But since we cannot travel right now because of the pandemic, I decided to share with you a makeup tutorial that I did way back,” she shared.

According to Bea, she did the same makeup — inspired by the calavera used to celebrate the Día de los Muertos or Day of the Dea — when she spent Halloween with Liza Soberano and Enriquel Gil back in 2017 in Seattle, USA.

“I did this makeup when I was in the States with Liza and Enrique for a series of shows. Naabutan kami ng Halloween nu’n sa Seattle I think two or three years ago. I did the makeup on my own. If you are not familiar with Día de los Muertos or Day of the Dead — it’s a Mexican tradition where they celebrate their lost loved ones,” the actress said.

GRATEFUL HEART ❤️ Thank you for all the love and well-wishes yesterday. Even though we cannot be physically together on my birthday, you didn’t fail to make me feel special. Thank you 🙏🏻 . . Make-up @tingduque Hair @hairbybrentsales Styling @qurator_studio @maitabaello Dress @vaniaromoff Art Director @pamquinones Photog @charismalico

Bea added that it’s perfect for virtual parties with friends. Plus, it doesn’t require an elaborate costume.

“Right now, wala tayong parties even at home. Or we can’t go out. So this makeup is perfect for your Zoom parties and it will work just for this. And may mga Halloween costumes na dapat total package, ‘di ba? But this one, okay lang na [half body] lang ang shot,” she stated.

The Kapamilya star mostly used items that can be found at home including a makeup foundation, an eyeliner, an eyeshadow, a lipstick, an eyelash glue, and some sequins. Bea also put on some blue contact lenses, a wig, and a headdress to complete her look.

In the same vlog, Bea recalled some of her most memorable Halloween stories including one where she went straight to the airport after attending Raymond Gutierrez’s “Opulence” party last year because she said she was “going through” something at that time.

How’s your weekend so far? 😊 Join me as I give you the second part of my virtual home tour! Link in my bio 😘 #ByBea #LifeisBEAutiful

The 33-year-old actress also shared a hilarious story where she went to Universal Studios in Singapore wearing a Wonder Woman costume on the wrong date because she was told by a friend that people usually celebrate Halloween on the 1st of November.