Star Magic artists joined together to give tribute to founder Johnny Manahan as he celebrates his 50th anniversary in the entertainment industry. 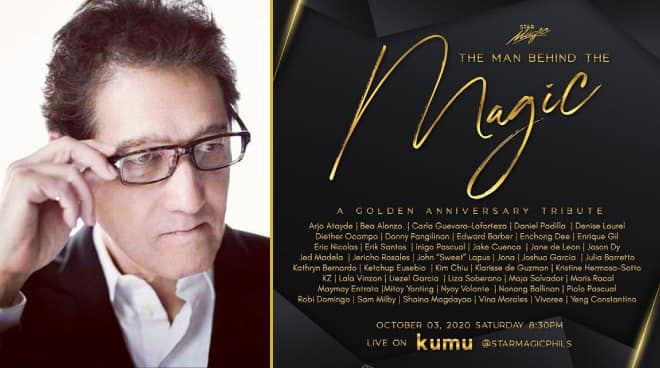 Star Magic artists joined together to give tribute to ABS-CBN’s talent management arm’s founder Johnny Manahan—fondly known as Mr. M—as he celebrates his 50th anniversary in the entertainment industry.

It’s a golden celebration for the Man behind the Magic! Join us as we honor Mr. M’s 50 magical years in the entertainment industry, with special participation of some of the best in the industry today. See you later at 8:30 PM, only in Kumu.

During her part, actress Liza Soberano recalled lessons she learned from Mr. M. Recalling her early days in showbiz, Liza narrated, “I started with Star Magic when I was 13 years old. And then, siyempre ‘pag bagong artista ka pa lang, you want to experience a lot of things that other artistas are doing. So like in terms of make-up t’saka ‘yung pananamit, ‘yung glam team ko t’saka ako, we would always go all out like during ASAP. Sobrang kapal lagi ng make-up ko kasi I thought that was normal. And then ilang beses pinatawag ako ni Mr. M, they would say on ASAP it’s principal’s office. So pinapatawag ako ni Mr. M to remove my makeup because he told me that I should value my simplicity as it is, and he told me that I should learn to be confident kahit na wala akong makeup. And he taught me also to love myself. That’s what I picked up from Mr. M po.”

Meanwhile, her reel and real-life partner Enrique Gil, who was just beside her during the live stream, shared his own experience with the “man behind the magic.”

According to him, his memorable moment with Mr. M was when he was also starting out in showbiz. “I think ‘yung pinaka best memory ko kay Mr. M was when I was starting out so nag-o-audition pa lang kami ‘non, at ‘yung mga kasama namin ‘don was puro theater actors. So syempre, going inside, syempre ako, as galing lang ako from college, wala pa akong background sa acting, singing, dancing, as in wala talaga,” he recalled, saying that Mr. M suddenly entered the room. He then asked who can sing, dance, and act. Enrique said that everyone raised their hands except for him so Mr. M asked him to come forward. “So pagpunta ko ‘dun, [he said] ‘what’s your name?’ Sabi ko, Quen po. ‘Di ka marunong sumayaw? You can’t sing, you can’t act, you can’t do anything?’ Yes po. ‘You want to be an artista?’ Sabi ko, okay lang po. ‘It’s okay. You can learn. I’ll help you,’ sabi niya.”

73-year-old Johnny Manahan entered the industry in 1971. He honed many artists who became big names in the showbiz industry, as well as directed various shows and projects that made a mark in Philippine showbiz through his 50-year long career. Some of these projects included the iconic ASAP, Palibhasa Lalake, Abangan Ang Susunod Na Kabanata, Ang TV, Home Along Da Riles, Oki Doki Doc, and The Voice of The Philippines, among others.

You can watch the full tribute episode on Star Magic’s KUMU app.