Catriona Gray said Lt. Gen. Antonio Parlade, Jr. has already apologized to her for publicly “warning” her about her supposed association with women’s rights group Gabriela. 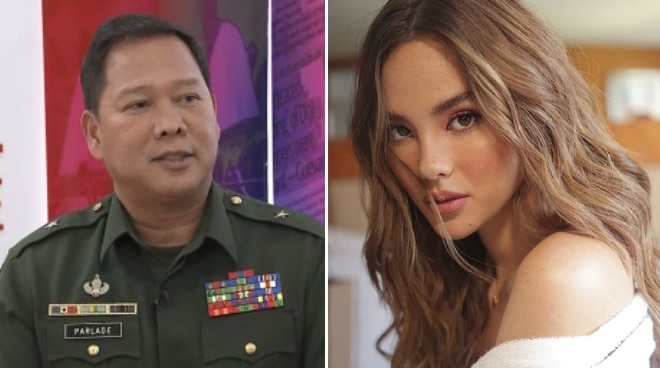 Catriona Gray said Lt. Gen. Antonio Parlade, Jr. has already apologized to her for publicly "warning" her about her supposed association with women's rights group Gabriela.

Speaking on ANC on Wednesday, October 28, the former Miss Universe said Parlade reached out to her via a formal letter of apology.


"Yes. Just last night po, General Parlade reached out first... to my team and also to myself to personally apologize for dragging my name into this issue," she said. "I appreciate that he reached out because it gave me clarification on my end also, for the surprise that I felt. I do appreciate him taking that initiative."

In a statement on October 21, Parlade, an official of the government’s National Task Force to End Local Communist Armed Conflict (NTF-ELCAC), cautioned Catriona and actress Liza Soberano on their supposed ties with Gabriela, which he alleged is a communist front.

The military official told them that they should cut ties with the group, otherwise, they could suffer the same fate as Josephine Anne Lapira, a 22-year-old student from University of the Philippines Manila who was killed in an encounter between government forces and the New People’s Army in Nasugbu, Batangas in 2017.

"It's a pity she learned about nonsense things like nabbing a firearm, exploitation while already inside the underground. It was too late, she is dead," said Parlade. "The choice is yours Liza. And so with you Catriona (Gray)."

According to Catriona, she has not done any project or any activity for Gabriela in the past, so when the news about Parlade's warning came about, she was very surprised and concerned.

"Well, of course, the first reaction was concern. Even my family, my parents in Australia, they messaged me, really concerned for what was happening. But I know the groups that I work with," she said. "And with all respect to General Parlade and also to the Gabriela group, I have not done any project or any activities for them," she said.

"So when the news did come about, I was very surprised. But the groups that I work with, I want people to know that when I am an ambassadress, I don’t just stick my name on an organization without really knowing what that group does, what projects they are involved in,” she went on. “I knew the truth. The team around me knows the truth and I feel that what I stand for and what I work towards is really for the benefit of the Filipino people. I just continued to work with my groups and I am also really thankful that they showed support to me."

Catriona said her takeaway from this would be that everyone should "careful of the information you take as truth, and also to really research and fact-check before making public statements."

The beauty queen also said that this should be a learning curve for everyone that, "if there is an intention to protect, it should be done in a certain way."

"Because I feel like the way that it was done did not achieve what he intended to do... It actually caused a lot of concern," she said. "I hope that going forward, if there were any warnings to give or advice to give, it would be done in a proper means, which I feel is to contact directly to the group or an individual to let your concerns be known in that way."

In the end, the 26-year-old Catriona said she is standing up against red-tagging as it can construe someone in a certain light.

"I feel like there should be evidence or basis given for that tag, for that accusation, for saying that person is involved in that certain party," she said.

"As for me, there was no actual connection for me and that with the Gabriela organization. So just that alone is an example of what can happen if proper evidence is not given or proper basis is not presented forward," she added.