Rabiya Mateo said she believes she is beautiful then and now. 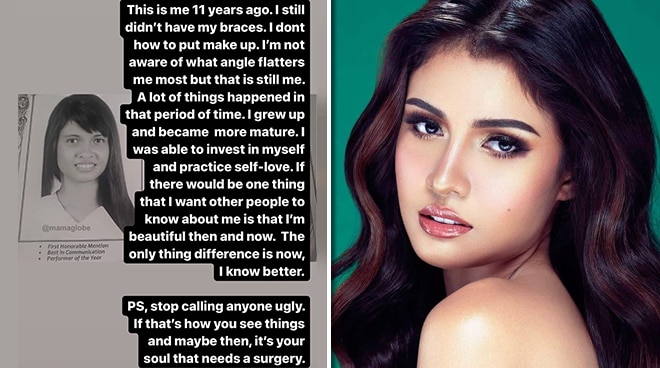 Miss Universe Philippines 2020 Rabiya Mateo took to Instagram to address speculations that she might have undergone beauty enhancement after an old photo of hers resurfaced on social media.

Days after she won at the inaugural Miss Universe Philippines pageant, a yearbook photo of Rabiya made rounds online. While the photo gained praises from netizens for the major glow-up she had in the past decade, there are also those who seem to think she might have undergone cosmetic surgery.

In her defense, Rabiya said the photo was taken 11 years ago — which means a lot of things have happened since she hit puberty.

“This is me 11 years ago. I still didn’t have my braces. I don’t [know] how to put [on] makeup. I’m not aware of what angle flatters me most  — but this is still me. A lot of things happened in that period of time,” she said.

Rabiya added that she learned how to invest in herself and practiced self-love throughout the years. And no matter what people throw at her, she believes she is and always be beautiful.

“I grew up and became more mature. I was able to invest in myself and practice self-love. If there would be one thing that I want to offer other people to know about me, it’s that I’m beautiful then and now. The only thing different is now, I know better.”

READ: Rabiya Mateo emotional as she addresses accusations: ‘They’re questioning my capability as a person’

The 24-year-old beauty queen then reminded her followers to stop calling other people ugly.

“P.S. Stop calling anyone ugly. If that’s how you see things, and maybe then, it’s your soul that needs surgery,” she wrote.

Iloilo, this crown is for you! I still can’t believe it happened. I’m still in shock right now and I’m still trying to absorb everything. I just wanna thank all the people who had helped me in this journey. To the Mateo Family, everyone from Balasan, my classmates from BCS, St. Candida School and Iloilo Doctors’ College, co-interns from SPUI especially to Anny Yu, my bestfriends, Acel, Andrea, Mimi and Karen Alerta, my #TeamBactung, Mama Dette, Raping, Toto and Inday Meggy, to Lula family especially to Bling, Remjo and Mara, to my make up artists Benjie, Gio Forbes, Maki Gu and Migz, to my stylists Dom, Josh and Nung Ryan, designers like Sir Bo, Paul Conte, Ram Silva(ily), Mamang Jet Salcedo, John Lee, Tata Blas Pinuela, Sir JunG Candelario (The best!), Sir Andrew Bugna and Sir Sidney Eculla, thank you so so so much. For most of the projects we have, I couldn't even pay you guys a single cent and you still helped me because you are the kindest people on Earth. I share this crown with each and every one of you! P.S. There’s still a Part 2 and 3 of my appreciation post. I wanted to make sure I would be able to mention everybody who helped me :)

Rabiya is the country’s representative to the Miss Universe 2020 pageant.