Janice de Belen has officially entered the world of vlogging. 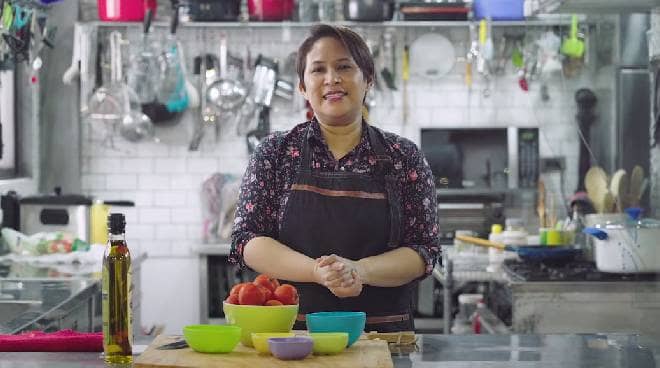 Actress Janice de Belen is the latest celebrity to venture into the world of vlogging, with a cooking show to kick off her first-ever vlog.

For her first vlog, Janice showed her fans how she makes her Tomato Garlic Sauce inside her own kitchen at home.

According to Janice, she chose the said recipe as it’s something “versatile” — a sauce one can make for plates of pasta, as food dip, or simply a spread for pieces of bread like focaccia.

“I’m here in my kitchen in my house. Of course I’m doing one of the things that love doing which is cooking — cooking for my family, cooking for anybody. And it’s nice kasi makakasama ko kayo uli after a long hiatus from cooking on cam,” she said. She added: “I’m quite nervous kasi naninibago ako. Parang akong manganganak today.”

She went on: “So much time has passed. Baka ‘di na naalala ng tao nagluluto ako talaga. But then here I am so I’m giving this a try. It’s worth a shot. So I hope you’ll enjoy it. I hope may matutunan kayo.”

True enough, Janice’s passion for cooking has not faded as she continued to prove her talent in making delicious food through her Instagram page called Kitchen of Janice where she showcases her delectable creations.

See some of the food she has dished up:

While it’s been months since Janice launched her YouTube channel, it’s the first time she made some original content as most of the videos she uploaded were clips from her films in the ‘80s including Super Islaw, 14 Going Steady, Bakit Manipis Ang Ulap, and Shake Rattle & Roll.