Marco Gumabao took to social media to express his admiration for his sister Michele Gumabao who recently bagged the 2nd runner-up title in this year's Miss Universe Philippines pageant.

“Proud of you! Of course, I don’t agree with the decision, but now’s not the time to be bitter about it,” he said on his Instagram Stories. 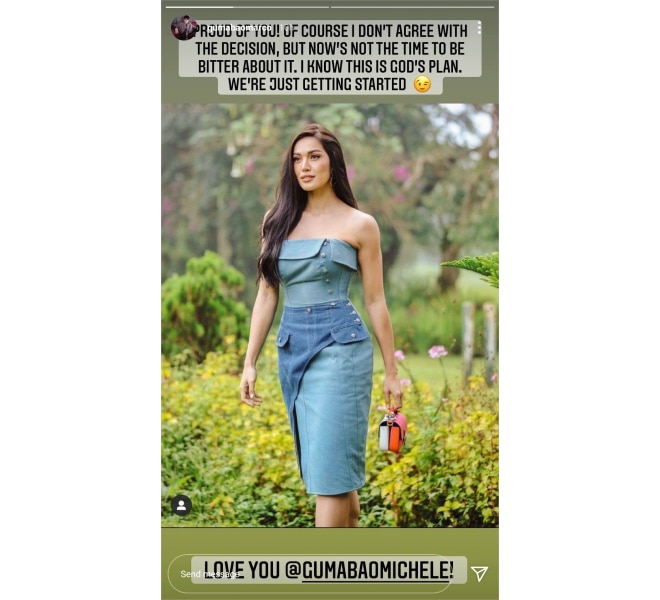 He added, “I know this is God’s plan. We’re just getting started. Love you @gumabaomichele!”

Meanwhile, Michele also shared a statement via Aces and Queens following the results of the pageant.

"To all my Michelin stars, thank you for being with me on this journey! I love each and every one of you! Thank you for all your support! Til the very end Laban!" she said in the statement.

She also explained why she left Baguio Country Club while the pageant was ongoing, stating she could not handle the attention.

"I left this morning sa BCC while the pageant was ongoing. I knew who won last night pa. I tried to go to our viewing party but everyone kept asking what happened all the hugs all the looks I couldn't handle that," Michele explained.

Michele also stressed that she can handle defeat but not the questions that people were asking her.

READ: ‘I can handle defeat': Michele Gumabao airs her side, expresses gratitude to supporters

"I can handle defeat hahahaha I can't handle the people asking me why why why...I'm sharing this with you because you deserve to know my side, we don't need to defend to anyone (sic). I did my very best and I have no regrets," she added.