‘Have you ever done any plastic surgeries’: Heart Evangelista responds

This is what Heart Evangelista has to say when asked if she ever had plastic surgeries. 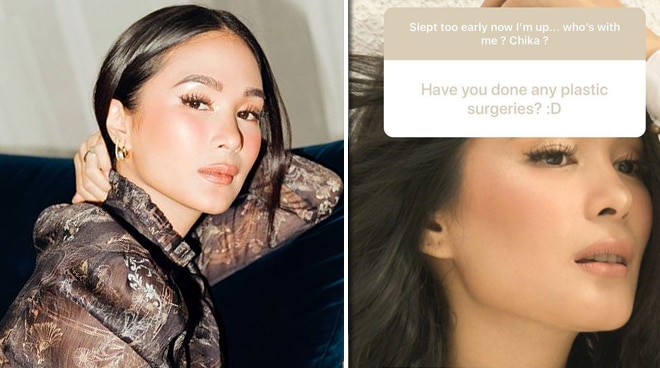 Heart Evangelista responded to the question of a netizen asking her if she ever had plastic surgeries.

The actress addressed the question on her Instagram Stories.

The netizen asked, "Have you ever done any plastic surgeries?"

In response, Heart remarked, "Never done anything to my face. My eyes and nose etc were made by God. I swear."

Heart stressed that she has nothing against plastic surgeries but she cannot stand people accusing her that she's lying about not getting anything done to her face.

"I have nothing against it in fact am for it if ikagaganda mo. I just hate the idea that some people think I'm lying," she stated. She added, "I also scar very bad so that freaks me out—knowing when I'm much much older how will do some work (sic)?"

WATCH: Heart Evangelista reacts to footage of herself from past ABS-CBN shows, films

Meanwhile, another netizen asked about her figure and how she maintains her slim body. "I have cheat meals too sometimes but since I'm very disciplined my body won't react to that one time," she explained.