Mimiyuuuh joined Bea Alonzo for the Kapamilya star’s latest vlog where the two of them discussed spreading positivity, among others. 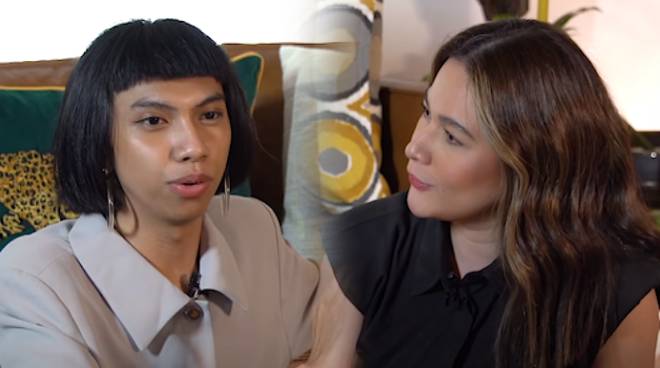 Kapamilya star Bea Alonzo had online sensation Mimiyuuuh as her special guest for her latest vlog.

While Mimiyuuuh is earning a lot of money from vlogging as well as endorsing various brands, he shared the importance of education especially if there is an opportunity to pursue it.

Mimiyuuuh — who finished fashion design at the De La Salle - College of St. Benilde — pointed out there are a lot of people who are struggling to finish their studies right now.

Talking about setting boundaries to protect mental health amid all the hate they are receiving online, both Bea and Mimiyuuuh admitted that while they get affected, they choose to shrug things off.

Having been in the industry for two decades now, Bea said she learned how to handle negative comments online throughout the years.

“Siyempre hindi naman ako ipokrita. Na-aaffect talaga ako. But siguro being in the industry for 20 years, parang naging training ko na ‘yun to just shrug it off. I mean, this may be a source of income, this may be your job or your career, but you have another life after this,” Bea said.

Mimiyuuuh, for his part, said his friends inspired him to think about the positive side: that there are more people who love him than those who don’t.

At the end of the vlog, Bea shared her realizations her conversation with Mimiyuuuh — particularly about having a responsibility to one’s audience.

She said: “I love when Mimiyuuuh says na meron siyang public responsibility to the audience. What we put out there, we don’t know kung paano ma-aaffect ‘yung mga viewers natin. So we also have to be responsible. If it won’t make this world a better place, why share it pa right?”

She went on: “If you want to get into vlogging, learn also how to set boundaries because you have to protect your mental health as well and I liked it kanina when we were talking about what is real and what is not. You should only care about what’s important in life — and that is your family.”

Bea also reminded her audience that authenticity is key to getting loved by many.

“Of course, ang sarap din makakuha ng validation from the likes, from the comments of people. But also know that what is real to you, what is authentic to you. At the end of the day, parang feeling ko du’n ka mamahalin ng audience mo. If they know you’re only putting out what is real and what is truthful para sa’yo and if it’s going to make the world a better place.