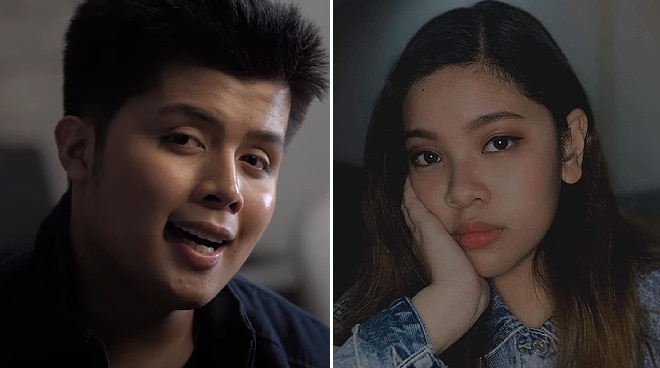 Elha Nympha got a sweet surprise from her boyfriend Brian Gazmen to mark their seventh monthsary as a couple.

Hello to the love of my life, you don’t know how happy I am to be your boyfriend and how lucky I am that you’re my girlfriend. ♥️ I am so happy that you came in to my life. You make me smile every single day, you make me become a better person. Although it’s quarantine and hanggang video call lang tayo, ok Lang sa akin yun, seeing you is enough for me already to make me smile. you are amazing baby. You are special, that is why I’m proud to tell the whole world that you are my girlfriend, the love of my life because I have never seen a girl like you in my life. You are perfect in my eyes. I love you so much baby ♥️♥️♥️ I will always be here by your side, supporting you and trying to make you smile ☺️

Released on their joint YouTube channel, Brian made a cover of the OPM classic “Kahit Maputi Na Ang Buhok Ko” with photos shot through instant films and video calls with each other during the pandemic used as footage for the video.

Expressing how much he loves Elha, Brian said love found him the moment she came into his life.

“Hello, baby ko. Happy seven months to us. Grabe, ang bilis ng oras. Hindi ko akalain na seven months na pala tayo. Pero baby ko, I have to tell you something, I always thought that you have to find love, but I thought wrong. Kasi nu’ng dumating ka sa buhay ko, love found me — because you found me, my baby. I love you so much. Kaya I dedicate this song to you, because I want to grow old with you,” he said.

Brian, who met Elha in one of the dressing rooms of the morning talk show Magandang Buhay, worked on a collaboration with her days after the two of them met each other in person.

Brian, towards the end of the video, said he considers Elha his other half.

“I know that nobody’s perfect, but in my eyes, you are the most perfect, the most beautiful girl I have ever seen. Parang ikaw na ‘yung other half ko. I won’t be complete without you because you complete me. I love you so much and happy seven months ulit.”

In a Magandang Buhay interview, Elha revealed that he and Brian officially became a couple two days before the start of the lockdown.

It was last August when Elha and Brian confirmed their relationship.