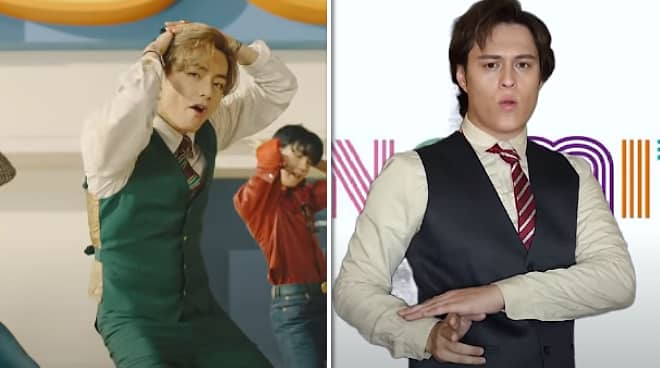 According to the actor, he is a big fan of the latest single of BTS titled "Dynamite" saying, "I like the song, I like the vibe. I like disco music. I like the ‘70s feel. I like the freeness of the ‘70s."

Enrique shared that he admires the look of V and Jimin in the "Dynamite" music video.

Enrique's sister Andie did his makeup for his transformation.

To complete the transformation, Enrique donned a similar outfit to V.

New video alert!! 🧨 Turning my brother into BTS’ V DYNAMITE VERSION ✨ had so much fun filming this HAHAHAH hope you guys enjoy!!

By the end of the video, Enrique performed some dance moves to the tune of "Dynamite."

The Gil siblings already had the chance to watch BTS perform live when the group had a concert in Hong Kong.

"Dynamite" is the fourth song of BTS which entered the top 10 of Billboard's Hot 100.

"You guys made this happen and this is something that you all need to be congratulated for and I truly hope that you are all feeling the amount of happiness equal to this big achievement. Thank you," Jimin said on the official Twitter account of the group on September 1 following the success of the song as translated by entertainment website allkpop.com.