WATCH: Heart Evangelista reacts to footage of herself from past ABS-CBN shows, films

Heart Evangelista was cringing at herself the entire time she was watching old videos from her past films, shows, and TV appearances on ABS-CBN. 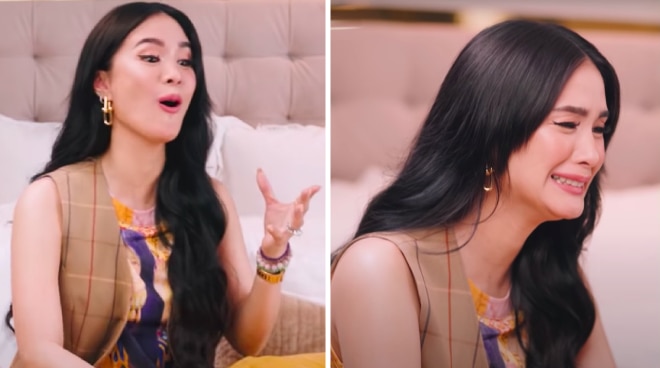 Heart Evangelista couldn’t help but cringe as she reacted to old footage of herself from films, shows, and other TV appearances on ABS-CBN that her team found on the internet.

Pretending I’m on vacation by dressing up. 🙊❣️

“Although I’ve seen some in the past, my team came up with different ones that I’m not really sure if I’ve seen and I’m just going to react to my old videos. I’ve been doing what I’m doing for 23 years so there’s a lot of junk on the internet,” Heart said seconds before pressing the play button on her laptop.

Heart and Chiz discuss the importance of voting in the next elections: ‘It is only during election time that we are truly equal’​

One of the first videos Heart reacted to was her dance number on ASAP where she shared the stage with Maja Salvador, Michelle Madrigal, and her former love team partner John Prats.

“Oh My God. Yuck. My God John Prats is feeling it so much, yes! I remember this. This is our birthday celebration on ASAP Fanatic: Full Circle and I remember this because I remember I bought this bra that had extra gel in it to make your boobs look big and I was wearing it,” she recalled.

“I wasn’t really over with all the Lindsay Lohan song [Rumors]. So this was actually a part of it. There’s Maja there, Michelle Madrigal. Wala pa ako sa first part actually. Du’n pa ako sa pinaka ending part papasok kasi this is John Prats and the girls,” she added.

Visualize the best version of yourself, start showing up as her. 💁🏻‍♀️✨ @louisvuitton 🤎 @casanuovaph

Sharing why she can still remember almost everything from that number, she said: “I know this actually because I hate this. Ayan na, kadiri. My God! I loved it though that I was trying to get out of my comfort zone. Oh pak, may pahawak-hawak pa sa face. Okay, it was bad. Buti na lang di na ako sumasayaw.”

Will she enter politics? Heart Evangelista responds to a netizen​

The next video Heart reacted to was one of her scenes with Glaiza de Castro and Allyzon Lualhati from the teen-oriented drama series Berks.

“My God the hair. Ang kapal ng hair ko. That’s what you call youth. Wow. Oh my God Glaiza, Allyzon. Ang baby. And I thought I knew everything at this point. Mga ka-berks! Cutie ‘to,” she said.

Heart, who did several films with ABS-CBN’s film production arm — Star Cinema — said her role as Portia “Por” Montecillo will always remain her most favorite character.

Live in the moment ✨

“My favorite character would probably be Portia because that was my second movie. I remember I was so excited I was part of something like a huge movie like Tanging Ina. And I was just really being myself. Well, mga added ten percent na kaartehan. But it wasn’t so hard kasi ine-exaggerate ko lang pagiging kikay ko. I really loved it because at that time bago palang sa kanila ang mga kaartehan na ganu’n. I also loved it kasi I was styling myself,” she said.

Heart Evangelista to give away tablets to students for online classes​

Will never get tired of dressing in all-white. 🤍 #LoveMarieXWhites

Heart Evangelista reacts to basher calling her ‘privileged’, ‘out of touch’​

At the end of the video, Heart shared her realizations, saying she can still see her old self in her right now only less “maarte.”

“So much has changed but when I look back, it is still very much me. And I guess it’s a good thing. Not really a bad thing kasi ‘yun pa rin ako. Maarte pa rin, nag-tone down lang. But that’s still the Heart that I know,” she said.

In the same vlog, Heart reacted to one of the interviews she did for the serye Hiram Na Mukha where she played the role of a disfigured woman.

Heart Evangelista started her career with ABS-CBN in 1999 and remained a Kapamilya until 2008 before transferring to another network.