WATCH: Enzo Pineda plays a shady TV reporter in ‘He Who Is Without Sin’

Enzo Pineda plays the role of a ‘shady’ television reporter in the movie ‘He Who Is Without Sin’. 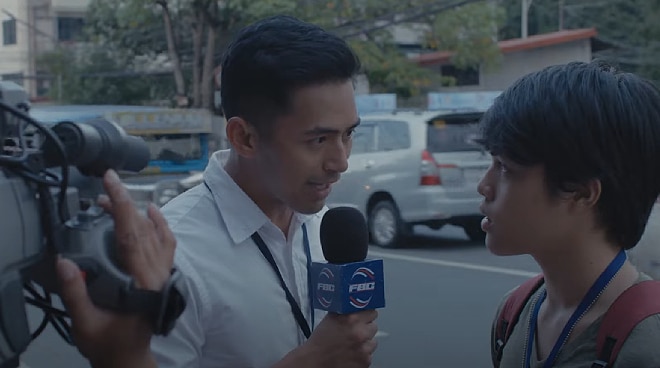 Enzo Pineda plays the role of a "shady" television reporter in the movie He Who Is Without Sin, which will be showcased online through a virtual edition of the Pista ng Pelikulang Pilipino (PPP).

Get your popcorn ready because He Who Is Without Sin is part of Pista ng Pelikulang Pipino 2020 Showing from Oct 31-Nov15 #ppp4samaall 😈 We are part of the premium selection so subscribe now at www.fdcpchannel.ph @elijahcanlas @jplaxamana

Written and directed by Jason Paul Laxamana, the movie revolves around the story of a broadcasting student, played by Elijah Canlas, who discovers that the TV reporter he looks up to is not who he seems.

According to its official synopsis, Martin, the broadcasting student, is invited for coffee by Lawrence, the TV reporter, one evening. During the days that follow, Martin shares with his friends separately three versions of what happened during his meeting with Lawrence: what happened, what really happened, and what might have actually happened. Through conversations with friends, Martin comes to terms with the idea that his idol—a dignified newsman who is supposed to be a paragon of virtue—is not who he appears to be on television.

He Who Is Without Sin also stars Gio Gahol, Lara Fortuna, Marnie Lapus, and Pearl Lagman.

The movie was originally announced as a finalist for the full-length category of Sinag Maynila 2020—one of the country's major independent film festivals—which was postponed last March due to concerns about COVID-19.

Aside from the film, other Sinag Maynila 2020 entries that will premiere online through the fourth edition of PPP include The Highest Peak and Kintsugi.

Check out the full line-up for PPP's Premium Film Showcase below:

A post shared by Pista ng Pelikulang Pilipino (@pistangpelikulangpilipino) on Oct 9, 2020 at 2:02am PDT