What Lea Salonga admires most about BTS

Lea Salonga says that BTS has been making her very happy and proud to be Asian. 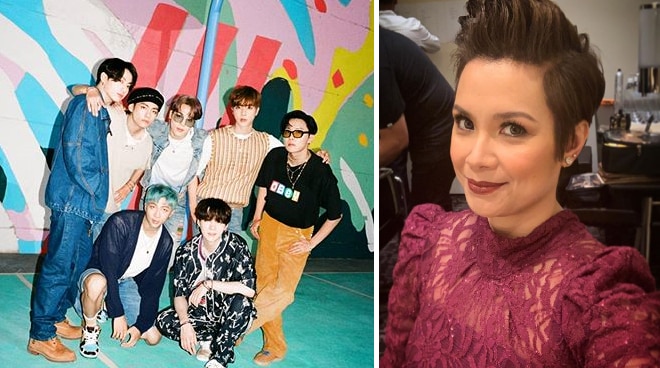 A self-confessed BTS fan, Lea Salonga shared what she admires most about the South Korean boy group.

In an interview with Entertainment Tonight, the Broadway star remarked that she applauds how BTS is representing what Asian talent is all about.

"Being able to represent their country—they're unapologetically Korean, these seven—they perform dance numbers in hanbok, in front of this big palace in South Korea with lights. They are unapologetically who they are. They are representing everything good that there is about coming from this part of the world," she remarked in the said interview.

Lea added, "I'm watching that and as an Asian performer, as somebody that's been doing this forever, as somebody who is scared for my friends in New York City because of the racism that's happening and then to see them being unapologetically Asian, performing in Korean, and doing so with excellence, they are beautiful men and doing things in their own way."

The singer stated that what BTS has been doing makes her extremely happy and proud to be an Asian.

"It's a great way of saying, 'You want to come after us with your racism, we're going to come after you with positivity and love and beauty. And excellence in performance and drive and ambition and perseverance.' These are the qualities that so many Asians and Asian Americans possess. It's wonderful to feel seen and represented in that way," she said.

Lea admitted that watching the group's interviews and past performances is one of the things that has kept her occupied during this pandemic.

"I didn't latch onto BTS until 'Dynamite,' and I think a lot of people felt the same way. Finally, there was a way to access them because there is a language barrier, and I call it a Trojan horse because here they come with ‘Dynamite’ and now that you're interested, here's all the other interesting music that they've done," she shared.

She further relayed, "It's a rabbit hole I've not gotten myself out of, and all of a sudden the language barrier no longer exists because I'm watching all of these music videos. I'm watching interviews, I'm watching things that go back to the beginning of their career when they debuted in 2013. 'Oh my God, these guys are just so effing amazing.' Their performances, their work ethic, their perseverance, their persistence, their drive, their ambition, everything."