The room of Sofia Andres’ baby Zoe gets a makeover! 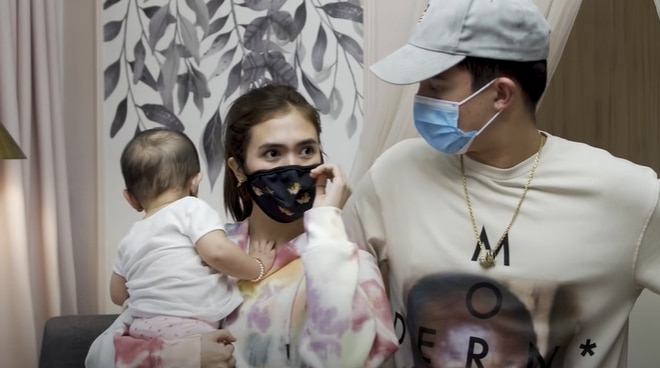 Moss Design — who also did the home fluffing for Bela Padilla’s new apartment — took on another challenge of transforming another space — the room of Sofia Andres’ baby Zoe.

Some of the key areas in baby Zoe’s room which had striking visible changes were the nursery lounge, the play area, the nursery dresser area, the bench seating, and the display shelving.

Cyndi Fernandez-Beltran, the woman behind Moss Design, said she was happy to work with Sofia and her partner Daniel Miranda whom she described as “chill” throughout the entire process of transforming Zoe’s room.

“Working with Sofia and Daniel … I didn’t actually think they would make bantay. They’re so chill and they really hung out with us. And I guess they’re very curious on how they’d see the process. But you know one thing that struck me, when Sofia and I opened the paint. Because she was very particular with the pink,” she said.

I am so excited to share with you Zoe’s room that’s designed by @mossmanilahome check the link on their Instagram page! 💯😍

Cyndi also said Sofia was hands-on with the project as the latter helped out in overseeing some of the tasks at hand.

“She was overseeing the wallpaper when we were installing the custom print. And she said: ‘Cindy, this looks like I hand-painted it.’ And you know, it’s just so nice to be able to have your client there and you know, watch your whole process and I appreciate that,” she said.

When the day of the reveal finally came, Sofia and Daniel decided to show Zoe her new room by bringing her with them.

The only view I’ll never get tired of for the rest of my life. 🤗

At one point, Sofia turned emotional as she couldn’t believe how the transformation turned out to be.

“It’s cheesy but I’m thankful … I don’t know why I’m crying. I’m so emotional because I think it’s about love,” she said. “Hindi lang siya isang project kundi it’s with a heart, it’s with love.”

Meanwhile, Daniel Miranda said he was also satisfied with the results of the makeover.  “They did a great job. And I’m very, very happy. Zoe’s very happy,” he said.

Sofia Andres first announced that she was already a mom back in June.

BREAKING: Sofia Andres announces she has a baby​

It was in 2018 when Sofia started dating Daniel.