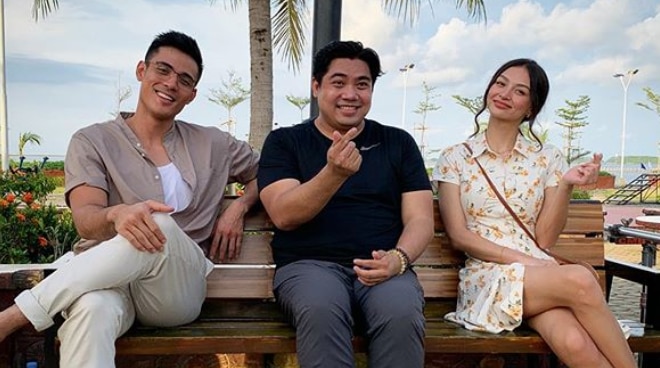 On their respective Instagram accounts, the two shared photos from the set of Parang Kayo, Pero Hindi, which is being directed by RC delos Reyes of Ten 17 Productions.

Based on Kylie's post, the photos were taken at the Hundred Islands National Park in Alaminos, Pangasinan.

In a separate post, the beauty queen-turned-actress introduced her new character, Daphne.

Last September, the three stars underwent an acting workshop in preparation for the project with acting coach Jose Jay Cruz.

Prior to the new project, Xian and Kylie worked together on the romantic-comedy film Love The Way U Lie, which is now streaming on Netflix.

The film was supposed to be part of the first Metro Manila Summer Film Festival this year.

Xian, 31, was last seen on the big screen in Untrue, which was released last February. On television, he starred in the ABS-CBN series Love Thy Woman with real-life girlfriend Kim Chiu, which concluded last September.

For her part, Kylie starred in the iWant Original Movie Love Lockdown with her boyfriend Jake Cuenca, while Marco was last seen in the romance-drama film Hindi Tayo Pwede with Lovi Poe and Tony Labrusca.