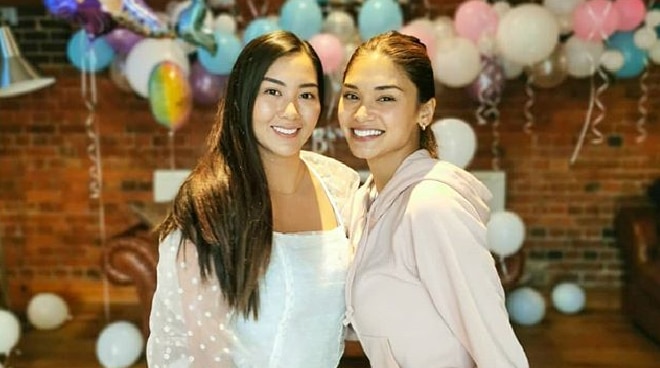 This is what Sarah Wurtzbach-Manze told her elder sister Pia Wurtzbach in a series of controversial posts she released Sunday, October 11, against the beauty queen-actress and their mother, Cheryl Alonzo Tyndall.

Its Libra season! I’m a Libra, so naturally, I named this gorgeous shade after my sign. Besides, Libras can get along with any type of person and are very versatile… just like this shade! This one is a soft medley of pinks and mauves, which makes it stellar for any skin tone. Horoscope or no horoscope, my prediction is that you’ll love gorgeous shade. 😉 Order yours from Lazada, Shopee , Zalora, and www.teviantbeauty.com @teviant In a separate post, Sarah slammed Pia for allegedly ignoring her instead of reaching out to her to apologize over the "hurtful" statements her elder sister had made against her.

"Maga-apologise na you hurt my feelings due to the statements you made when you were NOT SOBER, hindi mo magawa? Aangkas ka sa galit ko? Where's the understanding on your part? So I have to shut down my sadness and anger? Then you ignore me for days? What kind of treatment is that?" she said. Sarah then expressed her disappointment in Pia for not being there for her when she needed her most.

She also mentioned an incident wherein Jeremy reached out to her for help instead of Pia regarding a video their mother Cheryl uploaded on YouTube that raised concerns among his clients. In her succeeding posts, Sarah told Pia to apologize and stop threatening her.

"The way you show support is not family behaviour. Saka ka lalapit ng sorry kasi I'm not calling bullshit on your threats. I told you I was serious when I threatened you. I'm your sister but I'll be your worst enemy. No problem.

"Don't confuse money and status for power. I'm silent because [I'm  protecting] you and our f*cking narcissistic mom," she continued. However, Sarah warned Pia not to provoke her or else, she would "start showing people evidence."

"I'M NOT THE ONE IN THE WRONG AND YET I'M ALWAYS THE ONE BEING SILENCED," she added. Sarah also accused their mother of allegedly shaming her about rape, saying their "abusive" mom told her she probably wanted it as she has always been "sick in the head" since she was young. She then told Pia: "Tapos imbis na suportahan mo ako emotionally, bawal magsalita kasi masisira lang pinaghirapan niyo? Sasabihin mo pa ako ng, 'Why do you want to get back at her so bad?' F*ck you."

Addressing her followers, Sarah explained that she isn't looking for sympathy, nor does she want "fame, or to be acknowledged by others."

"Stop hating on Pia," she said. "Yes, I am angry and I still am, but your negative words will not fix anything. If anything, you're condoning negativity and that's what's wrong in the world.

"I'm fighting a losing battle everyday and I'm sorry if I took it this far, but being silenced for many years takes a toll on you. I don't want fame, or be acknowledged by others, or money, or things," she wrote.

Sarah went on: "I really just want a hug.. I feel so alone everyday."

"I'd rather vent my anger however I can, any way I can so long as it can release pain from within. I wanna be able to make it to tomorrow and wake up to my kids knowing that mommy hasn't given up and she's staying alive for us. Even though it's easier to just end it all."

She also told those who are following her on social media for gossip to unfollow her.

"I'm not tolerating idiots that don't understand the gravity of the situation. Idiots," she wrote.

Just recently, the Wurtzbach sisters were seen together during Pia's birthday celebration in London, which Sarah herself organized.

In a previous interview on Magandang Buhay, Pia credited her younger sister as her inspiration in pursuing her dreams of becoming Miss Universe.

Sarah, for her part, described her elder sister as her "anti-depressant" and "happy pill."

"Without her I feel like I cannot make it in life, she said. "Kahit may family na ako at may mga anak na ako, iba pa rin 'yung pagmamahal ko sa kanya."

As of this writing, Pia has yet to give her statement on the issue.