‘We’re not playing with our emotions’: Pops Fernandez on working again with ex-husband Martin Nievera

Former couple Pops Fernandez and Martin Nievera are back on stage with their week-long Valentines concert. 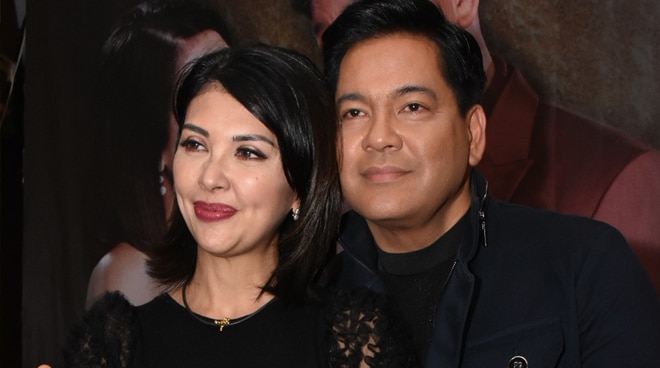 The king and the queen of the concert scene are back. Pops Fernandez and Martin Nievera are about to perform again in a week-long concert series for Valentines.

During the press conference last Wednesday, January 8, Pops shared how she and her ex-husband Martin became comfortable enough with each other again that they don't feel any tension between them now.

"I think we surpassed it; the stress and the tension. Parang gusto nga naming ma-tense e hindi na ayaw na. I always say this, performing with Martin is so easy. He makes it easy for me," she said.

Martin felt the same way and described their chemistry on stage as 'automatic'. "Pag magkasama kami ni Pops, napakadali, it's so easy. It's automatic already. I think the people see that. Nothing is forced, and we don't try to enforce anything on the stage, that we cannot deliver honestly and sincerely," he explained.

The OPM tandem will be bringing back their US concert tour they did last year of the same title. This time, it will be held at Solaire Theater on February 14, 15, 17 until 21. Pops and Martin will have special guests like Rita Daniela, Ken Chan, and more surprise guests.

LOOK: OPM Royalties Pops Fernandez and Martin Nievera meet the press today for the press conference of Two-gether Again Valentines concert. The concert will be happening at the Theater at Solaire, February 14, 15, 17, 18, 19, 20, and 21.

Meanwhile, Pops also addressed issues made by some netizens who are accusing them of 'pretending'  and 'using' their emotions for the sake of staging a concert.

"We never pretend. We don't pretend and we're not saying and never we are saying that because we're performing together there is a chance that we will get back together. No.

"We're not playing with our emotions. Whatever it is that you see, is what you get. I think it's just that we still discovered that we do enjoy performing together," Pops explained.

Martin dedicated the concert for their fans who have supported even before the two became a couple.

"If we did anything well together in the ‘80s, back then, its being had a team that seemed to work; the chemistry on stage, the songs that we sang. And because of this chemistry, marami rin kaming mga taong we used to call 'fans' and we wanted for these fans to keep the fandom alive.

"We shouldn't kill it just because we're no longer together but before we started performing together we we're still not together, the magic was in the performance.

Pops and Martin have two sons, Robin and Ram, before their marriage was annulled in 1999. Martin had his second relationship with Katrina Ojeda, who is the mother of his youngest son, Santino. Martin and Katrina's relationship eventually ended in 2003.