Jameson Blake on dating Elisse Joson: ‘She’s really beautiful inside and out’ 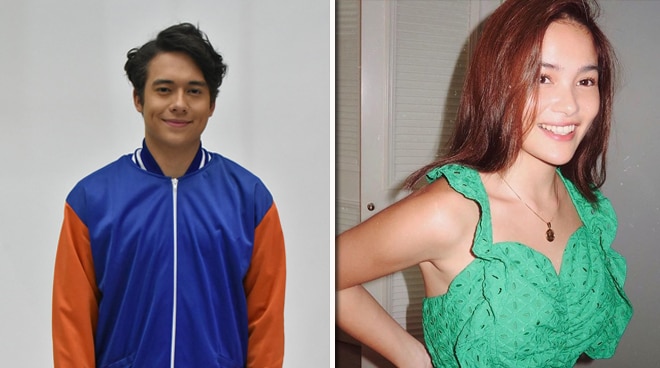 After finally admitting to courting Elisse Joson earlier his year, Hashtag member Jameson Blake said he made sure there would be no misunderstanding with his G! co-star and Elisse’s ex-boyfriend McCoy De Leon.

“Siguro na-affect but not in a bad way. Kinausap ko siya. We talked about it before so out of respect din as a friend. I don't let things go away like that din kasi. Gusto ko na maayos lahat, okay yung both parties. Nasa labas kami nun eh tapos kasama ko yung ibang Hashtags. This was way before, last year pa tapos wala, I just brought up the topic with him. Sabi ko, ‘Kung okay lang sa kanya if ever like maging kami ni Elisse.’ I asked him and tapos nag-explain siya. Parang ganun. It was way before me and Elisse were talking for a long time. Last year pa yun or beginning of this year pa yun. During the movie everything was smooth naman. Yung mga eksena naming okay naman. We did okay. Siyempre we talked so okay naman. I’m not really like a super bro code guy. Basta respect with friends, with family. So that’s what I did. Like how I showed my respect to McCoy,” he shared during the G! Movie blogcon las August 27.

Jameson admitted this is not his first time to be in a situation where he was caught between a friend and someone he loves. “I had to choose eh. Are you going to choose friendship or are you going to fight for love? Or are you going to pick your friendship? Kaya kailangan may communication. That’s why I talked to him para mas maayos instead of leaving it behind and tinuloy ko yung gusto ko. I still talked to it naman before. I had a similar thing din before pero ito kasi with Elisse and McCoy were together before so they have a past. Ito naman yung na-experience ko din before pero they were not together. It was a crush ng friend ko, parang ganun. Yun lang. Hindi mo kasi ma-expect yung mga ganun eh. Siyempre you won’t plan to like someone kahit na alam mo yung past boyfriend niya is your friend. Hindi mo ma-expect yung mga ganun. You don’t plan those things. It just happens eh. So siguro ganun yung nangyari sa akin,” he explained.

As for his status with Elisse, Jameson denied they are a couple already. “Hindi nga kami. Seryoso hindi kami. There’s a lot of personal issues. I don’t really want to let it out pero siguro to simplify it, we’re really just taking things step by step. We’re not really rushing things. Me and Elisse we enjoy our time together even as friends or even like not friends, even if we’re like together or not, parang ganun. No matter what, okay naman. Masaya naman. We go out like once in a while. Kasi busy din siya, busy din ako. So we meet up once in a while the two of us and minsan with friends din,” he shared.

After admitting that he has been single for the past three years, Jameson revealed what made him become interested in Elisse as more than just a friend. “Iba eh. It’s very common that people say na pasa pasa, people find relationships agad agad. Ako kasi, I never really dated anyone in showbiz eh and with Elisse, when I met her tapos nakilala ko siya sa Ngayon at Kailanman, we had talks. We had nice talks and I felt that there was a connection and it’s cliché but she’s a different person. Iba siya. Just knowing herself, yung personality niya, she’s not only beautiful but she’s really beautiful inside and out. There were times when she was going through things and I was just there to listen to her so ayun,” he added.

G! stars Mccoy De Leon, Jameson Blake, Mark Oblea, and Paulo Angeles and is directed by Dondon Santos as part of the Pista ng Pelikulang Pilipino film festival which will run from September 13 to 19 in cinemas.