Mike Shinoda also expressed his gratitude to his fans in the Philippines for their continued support for him and Linkin Park up to this day. 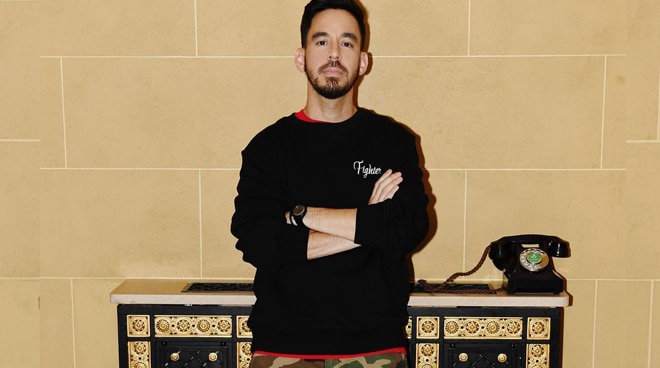 American rock band Linkin Park’s current lead vocalist Mike Shinoda, who is set to return to the country to headline a solo show, couldn’t be more thrilled to come back and perform for his Pinoy fans.

Check out my "Get To Know" interview with @euphoriazine coming in October /// #EUPHORIA9 Photo: @jackalexanderuk

“I’m super excited. It’s been a long time. I’m just like looking up online right now when was the last time we came to the Philippines. I think it was 2013,” he said in an exclusive interview with PUSH.

Having been to the Philippines a couple of times already, Shinoda, who also happens to be a keyboardist and rhythm guitar player for Linkin Park, shared some of his most memorable experiences from his past visits to the country.

“I mean, obviously the shows have been amazing. It’s probably the first thing I think of - the shows, then the fans. But also I remember the people just being really warm and welcoming and of course, the food being incredible as well,” he stated.

With Mike Shinoda all set to stage his Post-Traumatic shows in Asia namely Taipei, Manila, Jakarta, and Nagoya, he shared what makes doing solo shows different from touring with Linkin Park.

“Well, one thing that’s been really fun about solo shows has been the flexibility because for me, the format of a Linkin Park show has always been very scheduled and like rigid. Because the guys really thrive in the type of show where everything is meticulously crafted. And so every little detail is kind of crafted before the shows,” he said.

He then went on to talk more about the incredible people behind his amazing shows, revealing how he was able to form a team of versatile artists.

“But with my solo shows, I wanted to work with a couple of musicians who are a little more comfortable improvising. And it started with my drummer Dan who I actually found on Instagram. A friend of mine said ‘Oh man if you’re looking for a drummer, you should check out this guy.’ He’s such a kind of a free spirit. Like if you ask him to play something specific, he learns it very quickly. And he’s precise but at the same time, if you wanna go off in a different direction, you improvise in the part of change something on the day of the show, maybe you know, ten minutes before you go on stage, he learns everything very quickly and he’s really great. He’s a good dude,” he said.

“So once I found Dan, I also found Matt who plays guitar strings and keyboards. He’s very versatile player. So it’s the three of us. If I had an idea to kinda change gears or change something in the middle of the show, there have been times when fans have held up signs and say ‘Please play this random song’ that you haven’t played for twelve years. And once in a while, you’ll see those ‘Oh we could actually do that.’ So with this setup, I’m able to do that,” he added.

Revealing that he’s been in the studio making music since the beginning of the year, he said he is always keeping doors open to working with new artists.

“I’m always listening to music. I’m always listening to new things. And oftentimes, I really get a lot of joy about introducing people to new artists, to new songs. And though, whether that’s friends of mine or some guys in the park or even the fans. I love making playlists and setting up with people. I don’t know what that means in terms of new music that I’m creating. I’m always making new stuff. And since the beginning of this year, I’ve been in the studio kind of like keeping the door open to different artists and setting up sessions with people,” he said.

While Mike Shinoda feels excited to release new music, he’d like to keep things to himself at the moment so as not to ruin the surprises. Plus, he wants to make sure his new music is ready for the world to listen when he decides to let it out in the open.

“None of that is scheduled yet. A lot of things are starting to get close to being scheduled for release. But I don’t have anything I can tell you about at this point because you know, I don’t wanna spoil surprises. Again, like I always keep the fans aware of what’s going on in my social media - usually on Instagram, and also on Twitter and Facebook. But like I said, as things kind of continue on this year, I think you know, for me, music isn’t a thing - although I do it all the time, I don’t tend to, at this point, haven’t really just throw stuff out into the world without some real craftsmanship going into it. So I tend to want to spend a lot of time you know, just making songs sound right and it’s ready for the world,” he stated.

Having received so much love from his Pinoy fans through the years, Shinoda could only utter words of  gratitude for having them around since his early days with Linkin Park up until he decided to pursue his solo career.

“The fans have been amazing, you know, I mean through everything that’s been going on. Not only in the last couple of years but before that as well in supporting the band in you know, being there for the band as we’ve come through different artistic moments. You know, changing sounds and changing styles - experimenting and playing with different things. Each time the fans have been you know, wonderful to us. So, they know, I don’t need to say. I’m grateful to them. And I’m excited to come to Manila,” he stated.

Teasing fans of what to expect from his Manila show, he said: “It’s gonna be a really exciting show. I think this run in Asia is the last to the last solo shows that I plan for this Post-Traumatic cycle. So this will be the last one of these styles. I’ve never done shows like these shows. It mixes all the different stuff from all the different projects that I’ve been a part of. Like Linkin Park songs, my songs, other songs, the new solo stuff, playing different things and remixing it onstage and whatnot. You know, there’s definitely something for everybody in the set. And I’m not planning to continue to do things exactly like this. So now’s the moment to catch the show.”

Popularly known for being part of Linkin Park whose songs include “Numb,” “In The End,” and “What I’ve Done,” among others, Mike Shinoda pursued a solo career back in 2018 with a debut album titled “Post-Traumatic.”