Couple Goals: Richard Gomez and Lucy Torres-Gomez do not feel the pressure to always be picture perfect 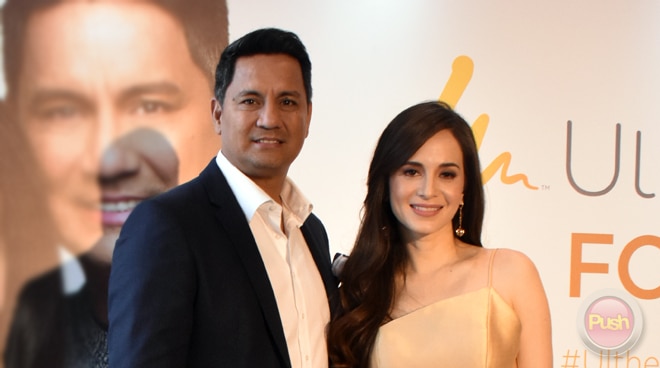 Although they are being dubbed by netizens as #CoupleGoals, celebrity husband and wife tandem Richard Gomez and Lucy Torres-Gomez said that there is no pressure for them to always look picture perfect.

“No, no. Siya [referring to Richard] nga wala nga siyang paki kung anong pino-post niya, eh,” said Lucy in an interview after their launch as brand endorsers of the non-invasive beauty procedure Ultherapy on Tuesday, August 13.

Acknowledging the pressures brought by social media in this day and age of technology, the Congresswoman of Ormoc City, Leyte, added, “What we do for ourselves, we don’t do it so we could play up to social media or play up to the image of what people have of us. Parang our Instagram feeds are very organic in the sense na it’s really just a reflection of what we do on a day-to-day basis. And, that’s not even all of it. Kasi there are some people who can post, maybe four, six times a day but we just can’t, because parang you forget about it and before you know it, ah midnight na. So some other day na lang.”

And yes, anytime with you for ice cream.♥️

She also offered encouraging words to netizens. “But that’s one thing I’d like to tell the younger set siguro na just because you don’t post it, doesn’t mean it’s not important or it didn’t happen. Kasi now, there’s so much pressure na when you’re in an event, ‘We have to post, we have to post kasi baka magalit ‘yung host or she might feel na hindi important ‘yun.’ But it’s not like that. We should change the messaging of social media na it’s not about what you post all the time. Sometimes, what you post is really just what you are able to post.”

Meanwhile, Lucy and Richard, who celebrated 21 years of marriage last April, shared what has been keeping them happily settled. “We laugh a lot. It’s a very easy relationship. We find humor in [so many ways],” Lucy told PUSH.

“We enjoy our company together. She talks a lot, I listen more,” Richard lightheartedly said.

“At saka low maintenance kami because we don’t have to do big things for each other to make us appreciate the relationship we have. Like hindi kami big on celebrations or on birthdays. Parang he’s never pressured to buy me anything. In the same way na I’m never pressured to stage a production for him, not that there’s anything wrong with that. But that’s just not how we operate. It’s also sweet because when you least expect it, like when the day is very ordinary, he’d come home with flowers or a gift,” Lucy shared.

Busy with public service (Lucy is Congresswoman while Richard is Mayor, both of Ormoc City, Leyte), the couple gives credit to online platforms to still be able to connect with each other despite the busy schedules.

“We don’t have love letters anymore. I mean we don’t do snail mail. But then you look through messages on your phone, [they’re] different from the written word pero at least ito, the thought is still nice to read back on ba ‘pag nasa phone mo. You take what you can. You are thankful for what’s there and you celebrate that instead of finding for what can’t be. And, what can’t be right now is day-to-day together kami kasi physically, ang layo ng Ormoc talaga sa Manila. ‘Yun lang. Siguro not being resentful of where life takes you like now, life finds us working from two different stations but thank God, there’s FaceTime,” Lucy said.

But how do they manage relationship conflicts?

For Richard, communication is key. “You have to talk about things all the time. If there are issues that need to be resolved, you really have to talk about it and then find solutions. Find a voice to end not really conflict but to settle an issue always.”

This was then echoed by his wife. “He’s very surgical about issues. Parang if it needs to be talked about, we talk about it. What solutions need to be done, eh di we do it. And then, parang he’s able to break down in very practical terms or in a very objective way what needs to be done. Hindi ‘yung you’re all feelings and all emotions, lalo na when it’s work-related,” Lucy said, reiterating that Richard is not complicated person to be with.