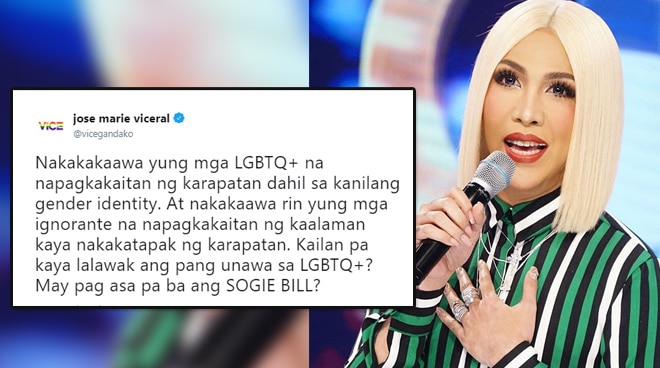 A transgender woman’s arrest after being barred from using the women’s comfort room in a shopping mall in Quezon City has inspired a few celebrities to rally support for the passage of the Sexual Orientation and Gender Identity and Expression (SOGIE) Equality Bill, a measure that seeks to protect the LGBTQ community by penalizing all forms of discrimination.

On Twitter on Wednesday, It’s Showtime host Vice Ganda expressed his disappointment over the discriminatory harassment the said transwoman, Gretchen Diez, 28, has experienced because of her gender identity.

Meanwhile, in a series of tweets, TV host and comedian Jervi Li, otherwise known as “KaladKaren Davila”, called the incident as “horrifying” and “barbaric.”

THIS IS APPALLING!!! What is happening? https://t.co/1gnFQB9Upx

Senator Risa Hontiveros, who authored the SOGIE Equality Bill in the Senate, similarly condemned the harassment and called for her colleagues to pass the measure.

"She is being harassed for living her truth. Discrimination against transgender people has to STOP! LGBT persons face harassment & discrimination every day. This must STOP!" she added.

Meanwhile, Diez said she’s determined to file charges against the mall for violating a Quezon City ordinance, which prohibits business establishments to discriminate people based on their SOGIE.