Seeking attention? Chie Filomeno claps back at basher claiming she wants BLACKPINK fans to notice her in new photos

One basher’s comment did not sit well with Chie Filomeno. 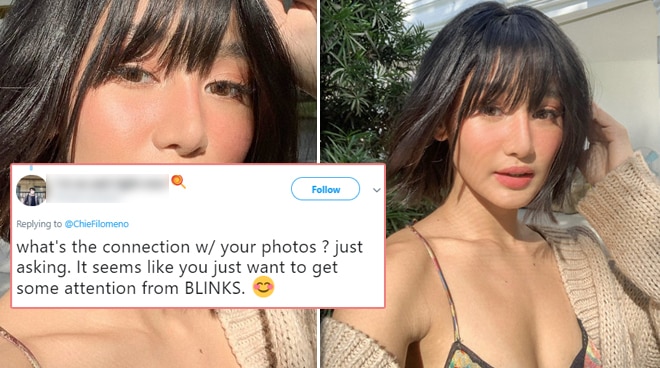 Chie Filomeno did not mince her words against a basher accusing her of posting about BLACKPINK just so she could get noticed by fans of the K-Pop group.

Last Monday, July 8, the GirlTrends member posted photos of her, which garnered more than 25,000 likes and 1,500 shares on Twitter.

While her post received mostly positive feedback from netizens, one Twitter user questioned her post and interpreted her caption as merely seeking attention from fans of BLACKPINK.

“What's the connection with your photos? Just asking. It seems like you just want to get some attention from BLINKS,” the basher wrote.

what's the connection w/ your photos ? just asking. It seems like you just want to get some attention from BLINKS. 😊

Chie then decided to respond to the basher and defended her decision to use BLACKPINK’s “Forever Young” as caption for her post.

She then went on, adding that she has always been a fan of BLACKPINK, contrary to the basher’s claim that she’s just using them for attention.

BLACKPINK is the K-Pop group behind hits “Ddu-Du-Ddu-Du,” “Kill This Love,” and “Boombayah,” among others.