Westlife thanks Pinoy fans for 20 years of loyalty: ‘It’s been too long since we’ve been away!’

Irish boy band Westlife returns to Manila as part of their reunion tour this year. 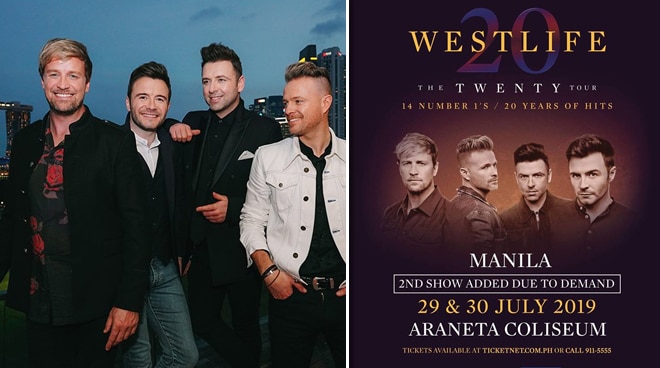 After arriving in the country on July 29, Irish pop vocal group Westlife got ready for the first day of their The Twenty Tour, a two-day show at the Araneta Coliseum. Fans lined up as early as five hours before the gates opened at 6 pm to see their favorite boy band reunite once again after disbanding in 2012. The show started a little past 8:30 pm with the crowd going wild as the members appeared on stage performing their latest song “Hello My Love” which was written for them by Ed Sheeran. During the show, lead singer Shane Filan admitted he was happy to be back. “Honestly I told the boys coming here tonight, ‘Do you remember how loud the fans are?’ You proved it tonight guys. That as an amazing reception. It’s always nice to come into a country with so much memories and to have more memories tonight. We’re going to celebrate 20 years of Westlife together tonight and we’re going to take you through a journey through all those memories and all those songs,” he said.

Westlife member Mark Feehily shared his first reaction when he first arrived in Manila two decades ago. “Who remembers when we first came in 1999? Since then we certainly do remember and we remember when we first came to this wonderful country and met all of you guys and it really, really just blew our minds. I grew up on a farm in Ireland in the middle of a countryside. I couldn’t believe that I came all the way to the other side of the world and all these people knew my name and they knew my mother’s name and my father’s name and my dog’s name. My point is, since the very beginning, you guys have been passionate and supportive of Westlife and this concert this evening is to say thank you so much and we love you Philippines. We love you!” he recalled.

Another member Nicky Byrne also took time to address the crowd to share what they have been up to the past few years. “Seven years ago we decided to take a little break and we got married and had children. We had nine children between us by the way. Nine Westlife kids at the moment back home in Ireland. And we’re not finished there because Mark is expecting a little baby this year. Later this year, there’ll be ten Westlife kids. During that time off we all went across to do our own individual things and during all the stuff we did I’d always remember you guys on Twitter and Facebook and Instagram and you all supported everything we do so thank you so much for making us trend on so many occasions in the Philippines. This show is all about memories and good times and sad times,” he said.

During the concert, the band continually showed appreciation for their loyal fans through the years. “It’s been too long since we’ve been away and thank you for all of your support and let me just take you back to 1999 when we were a young band and all of you were a lot younger too. We started in Ireland in the west coast of Europe and we started traveling around the world and we got to Asia and we landed in Manila and it seemed like thousands of people were at the airport to greet us. And it was all of your support that led to us returning to the Philippines on many occasions to tour and we played in this coliseum on a few occasions,” Nicky added.

Presented by Wilbros Live. Tickets to WESTLIFE: The Twenty Tour in Manila are available at www.TicketNet.com.ph and at all TicketNet outlets nationwide