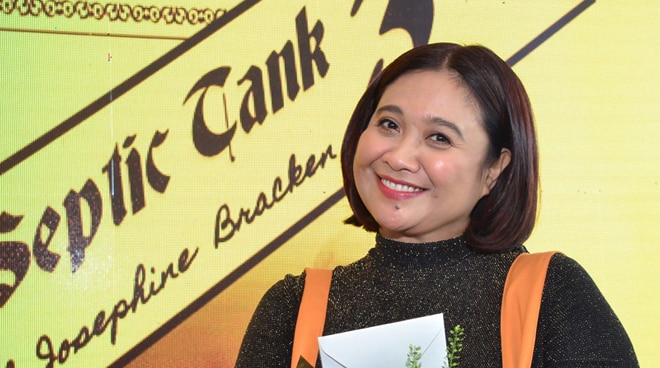 “Great franchises usually come in threes… so I thought there should be a third entry, it shouldn’t stop at one and two,” Martinez said in a press conference.

Unlike its prequels, this seven-part series directed by Marlon Rivera can be streamed and downloaded for free on the iWant app, available on iOS and Android or on iwant.ph.

Veteran film and stage actress, comedian, and host Eugene Domingo again stars in this series just like in its prequels. Portraying the character of a first-time director as herself and the lead actress as Josephine Bracken, Eugene shows here a megalomaniacal and egotistical version of herself. And as a first-time director, Eugene becomes meticulous in every aspect of the film production - from the costume designs to the editing, which usually causes commotion on the set. Basically, the format of Ang Babae sa Septic Tank 3 will showcase the process of making and producing a film - from pre-production to post-production.

Eugene here feels that as an established and accomplished actress, maybe it’s about time for her to finally venture into film directing, in hopes of following the footsteps of the film directors she looks up to in life like National Artists for Film Lino Brocka and Ishmael Bernal.

As she fulfills her dream, she becomes desperate and aggressive to the point of almost taking hostage director/writer Jose Javier Reyes to create the script. He takes the role of Direk Uge’s screenwriter who later on becomes forced to be her partner-in-crime.

Also starring in the latest sequel are veteran actresses including Joanna Ampil as Narcisa, and Mylene Dizon as Saturnina, Rizal’s sisters.  Kapamilya hunk Tony Labrusca also appears as the “the hunkiest Jose Rizal ever.” To give us a clearer perspective on history, historian Ambeth R. Ocampo is likewise in the film to explain the historical context concerning Rizal’s life.

“It’s also a way for us to comment on historical revisionism, how [others] appropriate facts and other events to fit our needs. We’re at an era where we twist the truth and skew the news to serve our purposes,” Martinez said, adding that compared to the previous Septic Tanks, this series is the funniest.