Kris Aquino recently asked her followers if she should make a big screen comeback via the Metro Manila Film Festival this year. Kris Aquino responded to a netizen suggesting that she avoid joining the upcoming Metro Manila Film Festival (MMFF) and retire. The comment comes after Kris' movie with Derek Ramsay titled K-Ampon has been chosen as an entry to the annual movie festival. 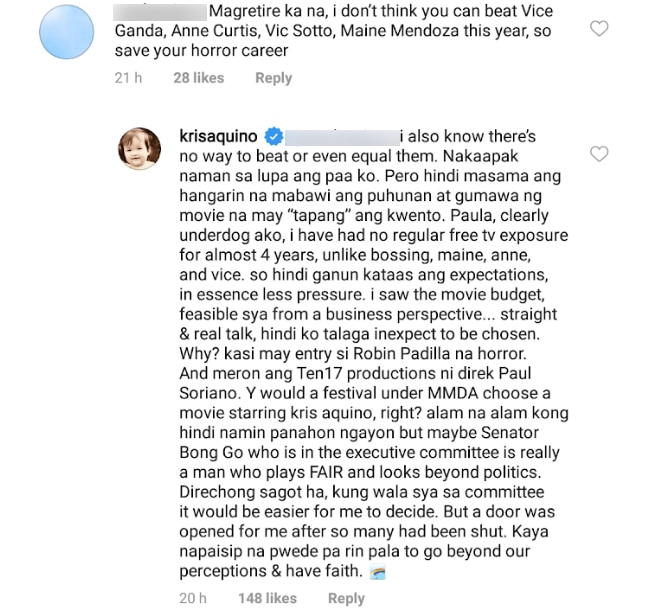 The actress-host also admitted that she actually did not expect that her movie would be chosen for the MMFF.

"Straight and real talk, hindi ko talaga in-expect to be chosen. Why? Kasi may entry si Robin Padilla na horror. And meron ang Ten17 productions ni direk Paul Soriano. Why would a festival under MMDA choose a movie starring Kris Aquino, right? Alam na alam kong hindi namin panahon ngayon but maybe Senator Bong Go, who is in the executive committee, is really a man who plays FAIR and looks beyond politics. Direchong sagot ha, kung wala siya sa committee it would be easier for me to decide. But a door was opened for me after so many had been shut. Kaya napaisip na pwede pa rin pala to go beyond our perceptions and have faith," Kris wrote.

Yesterday, Kris also expressed her worries over going back to acting.

"May checklist sila regarding my health and kung magbibigay sila ng medical clearance for me to shoot a horror. I’ve accepted na may physical limitations na talaga ‘ko. Humility has taught me other actresses can credibly play my role. Kaya po kayo ang tatanungin ko (since kayo naman ang manunood) - should I make my return via this horror movie or give way now para makahanap na ng other actress to take my place? Nagtanong ako, so hindi (ako) mapipikon sa kung ano man ang sagot," she stated on Instagram.