Both Sarah Geronimo and Ara Mina will be joined by actresses Gina Pareño, Yayo Aguila, Meg Imperial and Kim Molina for the Jun Robles Lana-helmed Unforgettable, to be released under Viva Films and The 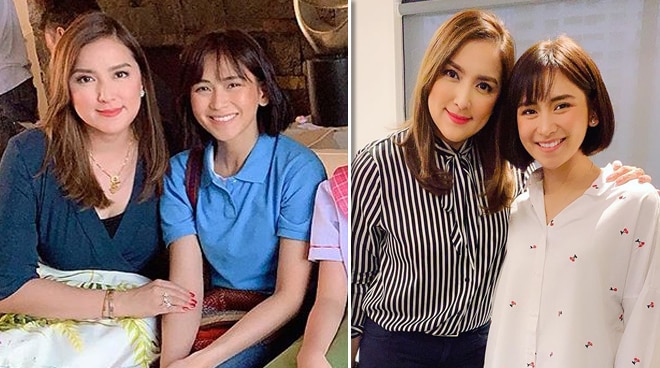 Stars Sarah Geronimo and Ara Mina have begun the filming process of their new movie Unforgettable.

The elder actress shared the update as she uploaded a photo of her and Sarah while on the set of the film on Monday. Both were joined by two child actors who were both dressed in school uniform.

“First shooting day of Unforgettable movie with the one and only [Sarah],” wrote Ara in a caption on Instagram.

Aside from Sarah and Ara, the female-helmed film will feature Gina Pareño, Yayo Aguila, Meg Imperial and Kim Molina – all of which were present during the look test, read-through, and story conference for Unforgettable, held at the Viva Films headquarters in late of May.

Of the project, the Popstar Royalty, who recently tied with Kathryn Bernardo as Best Actress at the 35th Philippine Movie Press Club (PMPC) Star Awards for Movies for her commendable performance in her latest film Miss Granny, hasn’t revealed much yet except that “its story will move our hearts, our souls and 'yung kahalagahan din ng mga hayop,” according to a previous interview with ABS-CBN News.

To be produced by VIVA Films and The IdeaFirst Company, Unforgettable will be directed by Palanca-winning filmmaker Jun Robles Lana, who is the same visionary behind the popular films, Die Beautiful, Ang Dalawang Misis Reyes, and The Prenup. He will be co-directing with husband, fellow director and producer Perci Intalan.

Aside from the upcoming movie, Sarah is also set to return as a coach in the brand new season of singing competition The Voice Kids, which she revealed during the launch of her own makeup line, a double duty collection fittingly called Pop Studio, last May 31.

“Ayun po, I will be busy promoting my own makeup line. I will film a movie. And abangan niyo po, magkakaroon ng another season ang ‘The Voice Kids’ this year. Yes po [babalik ako as a coach],” she revealed exclusively to ABS-CBN News.