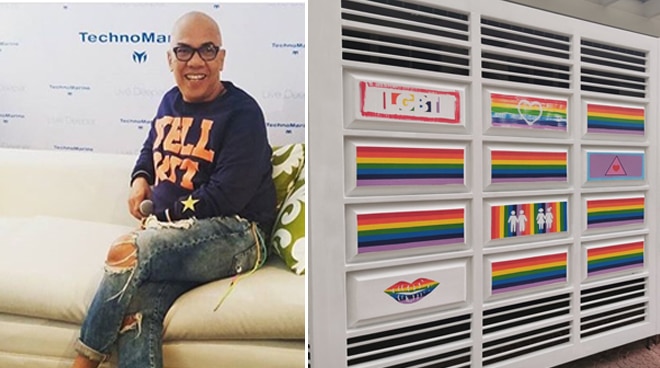 Boy Abunda couldn’t have been more vocal in expressing his support for the LGBTQIA+ community when he recently painted the façade of his Quezon City home with rainbow colors in celebration of pride.

This Friday, ABS-CBN’s MJ Felipe turned to Twitter to share snapshots of the TV host’s refashioned house as he honored the annual Pride Month, a celebration of gender equality and fight for equal rights of the gay community and their allies every month of June.  As seen in the post, his gate and wall were adorned with rainbow flags – long-known symbol of the LGBTQIA+ pride and LGBTQIA+ social movements – and unequivocal statements such as the popular catchphrase “Love wins” and a more expressive “Gay love is equal to all forms of human love.”

LOOK: In celebration of #Pride, TV Host Boy Abunda painted the facade and gate of his Quezon City house with rainbow colors. A quote on his rainbow-painted wall reads "Gay love is equal to all forms of Human love." pic.twitter.com/Zt1v6QiGGi

It isn’t a coincidence that Boy is one of the most influential gay celebrities in the Philippines. He said it himself in an excerpt of a piece he wrote in his book “Nanay’s Gay Boy,” published last December, stating, “Two things come to mind when my name is mentioned—that I’m devoted to my mother and that I’m proudly gay.”

Aside from Boy, many stars have expressed and pledged support for the gay community in the spirit of Pride Month, including the likes of Vice Ganda, Regine Velasquez, Angelica Panganiban, Nadine Lustre, James Reid, Jameson Blake, Elisse Joson, K Brosas, and Jaya.