Alyssa Valdez praised for acting chops in ‘My Letters to Happy’

Volleyball player-turned-actress Alyssa Valdez earned high praises from co-stars Glaiza de Castro and TJ Trinidad for pulling off her first theatrical role in the upcoming film “My Letters to Happy.” 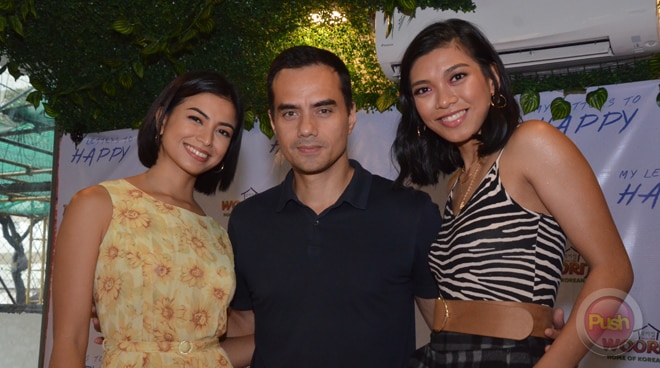 Alyssa Valdez earned high praises from co-stars Glaiza de Castro and TJ Trinidad for pulling off her first theatrical role in the upcoming film My Letters to Happy.

Here, the volleyball player-turned-actress will prove her acting chops as Cindy, a trusted and dedicated assistant and trainee who is in charge of managing the chaotic work life of TJ’s character, Albert. In a press conference held this Friday, June 28, Alyssa said that it had been a challenge, although a very fulfilling one, having to jump from the court to the big screen.

“Very happy na tinanggap ko ‘yung opportunity na ‘to kasi it was very different, different element and different environment for me. But it was very hard, actually. Kasi, in volleyball, your emotion is based on a situation given to you. But here, you have to take that situation, kung ano ‘yung ibibigay sa ‘yo ni Direk,” she said.

“It was very hard and challenging but I really enjoyed it. Kasi, once in your life, I think, you have to try something different and something new to open a lot of opportunities also and to know yourself better,” she added.

TJ, with whom she shot most of her scenes, attested to Alyssa’s potential as a first-time actress, noting that her discipline towards the craft is akin to what she displays as an athlete.

“I was very happy to give her a few tips. She’s very focused and trying to do her best to execute the scenes properly,” he continued.

Glaiza, for her part, said she admires Alyssa for breaking out of her comfort zone and trying new things, no matter how daunting, considering she’s already huge in the sports world.

But it was film director Pertee Briñas (creator of hit films Always Be My Maybe and Tayo sa Huling Buwan ng Taon) who was the first to put his faith on Alyssa as an actress. A self-confessed volleyball fan, he revealed that Cindy was a character he created especially for the three-time UAAP MVP.

“When we talked about it, sabi rin niya sa ‘kin na she wants to explore new things din kasi she’s been doing volleyball for a long time, alam naman ng buong Pilipinas ‘yan. I feel like I made the right decision kasi nung second scene onwards na, na-e-enjoy na niya. I think that’s very important. For me, it was easy and right that Alyssa would do it,” he added.

My Letters To Happy follows the story of Albert, an all-work, no play businessman who slaves away at his high-profile job as a means to cope with a sudden loss. At his lowest, he meets Happy (Glaiza), whose exuberant personality and boundless love for life jolt him out of his sadness. But things take a turn when he learns that, behind her bouts of happiness, Happy is battling a mental illness that is plunging her into depression.

Alyssa Valdez My Letters to Happy