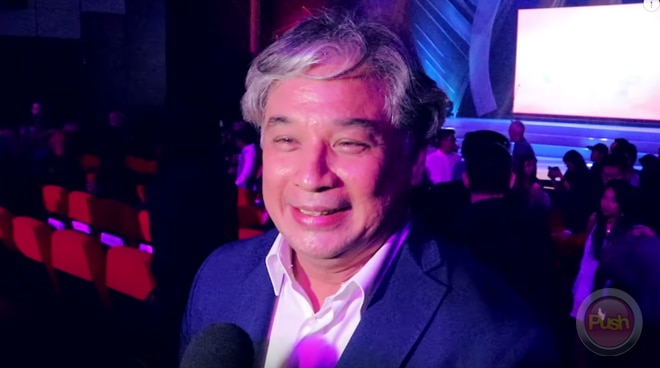 Acclaimed and multi-awarded actor Ricky Davao is a man who knows the ins and outs, what works and what won’t in the industry he is known and respected in: showbiz.

Since starting in the early ‘80s as a very promising talent and erstwhile heartthrob, the chinito actor who is the son of veteran actor Charlie Davao has seen it all, from stars with bloated egos to real acting talents with secure reserves, demanding or unpredictable talent managers to quiet and wise-thinking publicists. Add further the acid-tongued or calmly discoursing directors, Ricky, after nearly 100 movies and television shows where his versatility always on display, explains why he shows no sign of slowing down. “I always try to show or exert effort at work. I am always interested to learn new things. Do my assignments sa characters I play. Lagi lang talaga akong cooperative.”

With the movie Clarita now running in theaters nationwide where he plays one of the priests who exorcises the demons from the imprisoned provincial lass played by Jodi Sta. Maria, the actor has already played a priest approximately thrice in his career.

But while he plays serious characters even at times villainous one on screen, the ever-approachable actor is animated during interviews. “Sa tagal ng mga katulad ko sa pelikula, sa industriya, I make it a point to share what I’ve learned to the younger artistas. It’s how I can also help them eh to become motivated, para na rin ang interes nila in acting to grow or improve,” stating his generosity. Then adding in jest, “Sa amin naman na mga nakarami na!.... (avoiding the word “senior” and burst of laughter follows) it’s good na may mai-she-share kami.”

Enumerating the “secrets” of his longevity, the respected actor explains by starting “you know something, I came to realize there are very important things you need to offer kung gusto mong mag-tagal bilang artista. First kailangan talagang nasa katawan moa ng pag-arte. You must have a talent in acting. Kase in time you will be interested to develop it. Tapos you should know the level of professionalism na ipapakita mo sa mga katrabaho mo."

“Dapat maayos at marunong ka talagang makisama. That is an important thing kasi katumbas niyan somehow na marunong kang maki-respeto, may consideration ka with your co-workers. That pakikisama with respect go beyond the shooting period.”

“Nakilala ko ang mga artistang masarap magaan katrabaho. Of course may mga nakasama na rin akong mga artistang mahirap katrabaho” (eliciting laughter from press again and prodding him to name at least one) “hahahaha itago natin sa pangalang….” Then he makes a detour. “In cases like those, you just need to stand on your ground for your own good. Because at least you know na ikaw ang nagpapakita ng professionalism.”