Together with husband Xavi Panlilio, Dani Barretto, social media influencer and the oldest daughter of actress Marjorie Barretto, talked about her pregnancy for the first time at length in a new vlog 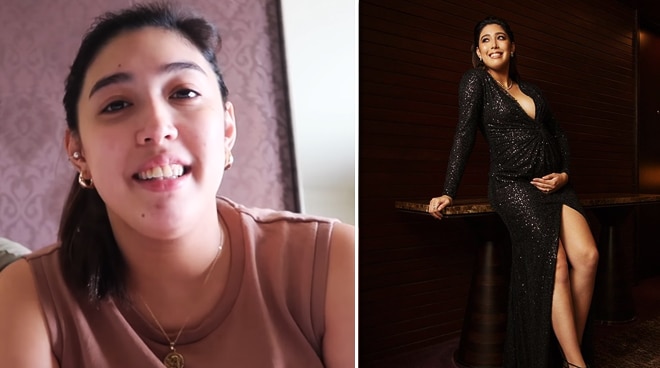 "It's honestly a dream come true for me."

This was the statement of Dani Barretto as she opened up about her pregnancy for the first time at length in a new vlog entry on Thursday.

The video comes a day after the oldest daughter of actress Marjorie Barretto confirmed the months-long speculation that she's currently expecting her first baby with Xavi Panlilio.

My Inspiration and my purpose. You changed my life in so many beautiful ways. I never thought this kind of happiness was even possible. In a few months, you will be the most delicate treasure we will ever hold in our arms, and there will be nothing more fragile in the whole world. For countless days, and nights we will always look down on you and be reminded of all the love that the three of us will forever share. 📸: @mikehellyah Make-Up: @mkqua Hair: @ariesmanal_hair Styling: @cathsobrevega @styledbycath @ririverano @ktlandingin Gown: @itspatriciasnts @psofficiel Jewelry: @jmajewelry

"There are things I want to keep to myself not because kinakahiya ko or not because nahihiya ako. I wanted to keep it because I wanted to enjoy it kasi once it's out, wala na eh. Ang dami nang taong mangingialam, marami nang tao ang may sasabihin kahit na hindi naman kailangan or even if they don't know anything," said the social media influencer on why she and her husband chose to keep the news from the public for a short while.

"I'm doing this just to get it out there, and to just release the load off my shoulders and his. I don't want that when the time comes, there's another person that's going to get affected, and that other person is the last person I want to get affected."

Upon announcing the news, Xavi shared that they've gotten nothing in return but "love and support" from their family, friends, and fans.

"I will want to be the one to say that we are proud expectant parents. I'm so happy, it's unbelievable," he said.

"It's literally us growing as people. It's the best thing that's ever happened to us. Nothing could be any better than this,” he added.

For Dani, having a child is an answered prayer from the heavens as it had been her longtime dream to become a mother.

She said, "We've been so blessed. I cannot contain the happiness that I feel.

"When I found out, I never realized or I never thought that that kind of happiness was possible. Everything in our lives was just unfolding one by one and everything was so happy.

"When we found it, everything in my life just flashed. It was telling me that, okay, that's why those things in the past had to happen to me and to him because God was preparing us for that day."

The past few months have been a rollercoaster of excitement. Meeting you gave me butterflies, a proposal had us hold our breath, a wedding gave us all the love and joy to fill a lifetime, and what’s to come is what will piece it all together. In a few months, you will be the most delicate treasure we will ever hold in our arms, and there will be nothing more fragile in the whole world. For countless days, and nights we will always look down on you and be reminded of all the love that the three of us will forever share. Mommy and daddy love you ❤️ 📸 @mikehellyah

Although they have fears entering the all-new stage of parenthood - as with all first-time parents - the couple said that they're more excited for their lives to change forever.

Dani and Xavi, who tied the knot in late of April, ended the vlog by giving a sweet message to their future child.

Dani said, "To our child that's going to watch this in the future when you're older, we just want you to know that everything that we did was for your protection.

"I love you more than 3000. We are so excited to meet you. Everything from here will be just... we're going to be a fun, loving, and supporting family. You have very fun parents, by the way."