The hip-hop group won a cash prize of P2 million and a sure spot in the qualifier's round of World of Dance USA. 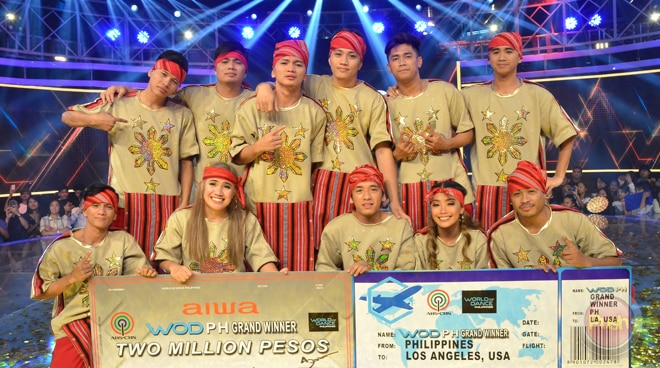 Following a series of jaw-dropping performance this weekend that earned them a nearly perfect score of 99.05 points from the judges and online voters, the hip-hop group was named the ultimate winner of the reality talent search, which means that they have won the grand cash prize amounting to P2 million pesos and a sure spot in the qualifier's round of World of Dance USA.

Meanwhile, dancing duo Luka and Jenalyn, who did a soulful take to Lady Gaga and Bradley Cooper's Shallow from the musical film 'A Star Is Born', placed second after garnering a total of 96.38 points.

Billy called their performance their "best" yet, while Gary said that they have have raised the bar high in the competition.

"Both of you have served as an inspiration to so many people watching. They all want to beat you. They all put you as the standard that they should come up to in order to make it this far," said the Mr. Pure Energy.

Youngblood Ken San Jose, who went all out in his fiery act set to Eminem's 'Lose Yourself', came in at third with a total of 94.93 points.

Both Gary and Maja commended Ken for shining through, while Billy, in between tears, called the lone performer "a champ".

"You give a new meaning to never giving up, never stopping. You're just insane. You're so blessed that you deserve to be here right now. You're a champ, you're a diamond that's just waiting to shine for the world," said Billy.