The Mystified actress talks about doing a villainess role after 27 years. 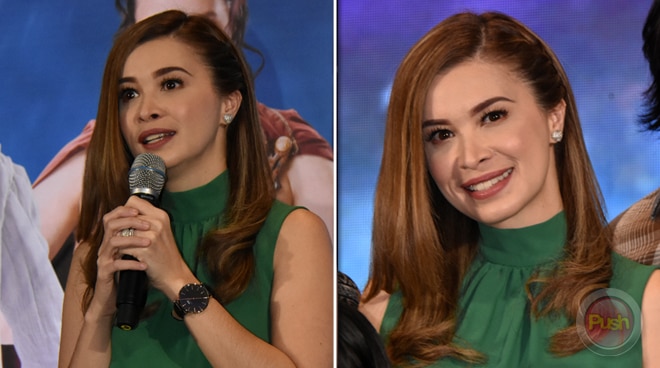 As part of the new iFlix movie Mystified, Sunshine Cruz shared she is happy to be cast as the main villain, who goes against the four witches played by Karylle, Iza Calzado, Diana Zubiri, and Sunshine Dizon.

“Of course I got nervous. Si direk Mark Reyes tapos yung apat ang gagaling namga artista. But I’m just very happy and blessed that direk Mark was there to guide me and of course the four witches sobrang tinulungan at inalalayan nila ako so I’m just very grateful and honored to be a part of Mystified. It’s really such an honor and blessing for me,” she said during the iFlix Originals press con held last March 14.

Aside from having to learn how to speak Arabic, Sunshine described her character as fun to do.

“Ang hirap nung lines. Hanggang ngayon hindi ko matandaan yung Arabic. It was a challenge for me of course because they are really great actors and actually doon sa shooting namin we just had fun. Kailangan kasi matapang ako dito, and at the same time, maarte. So I think na-achieve ko naman yung maarte and at the same time very powerful. So ang saya sa set and everybody was just so nice and professional so I really had fun,” she recalled.

For her fight scenes, Sunshine said it got very physical but she did not complain once.

According to Sunshine, this is not her first time to do a villain role.

“Ang isang difference sa Sunshine na nakikita nila before from here is first time ko na naka-itim na lipstick. Aside from being very tough and maarte, I think yung look ko dito is very different from what I’ve been doing before. Actually this is the third time that I did something like this.But the first time it was for a movie when I was 15 years old. It was with Joey de Leon, Pandoy ang alalay ng Panday. Maarte din ako dun pero that was when I was 15 and now I’m 41. So sobrang mas modern now and with direk Mark around talagang iba ang approach,” she stated.

Mystified will premiere on March 29 at 9pm.