Korina Sanchez on the joy of motherhood: “It wasn’t instant with me”

“I started with mixed feelings of uncertainty, worry, anxiety,” the newscaster and new mother reveals. 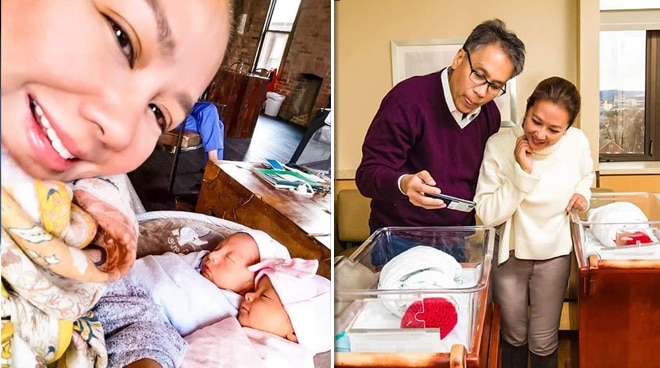 It came as a shock to many when newscaster Korina Sanchez and her husband, politician Mar Roxas, introduced their baby twins Pepe and Pilar into the world last week.

I think if you believe hard enough, the miracle you most want can come true. Announcing the arrival of our little boy and little girl. We're thinking of names. Any suggestions? Jack and Jill? Sonny and Cher? MariKor and KoriMar? Daniel and Kathryn? 😁 Did you ever think it could still happen for me? I never stopped believing.💚

On February 12, at around 1PM, the couple welcomed their children — a boy and a girl — at a hospital in Pittsburgh.

And look at the result? This is the photo shown in TVPatrol and The Star. OMG. There are several shots. I'll share them one at a time, okay? Alam niyo naman ang nanay, proud. Pagpasensyahan na ha? #MomIsKilig

Talking to PhilStar recently, Korina confessed that she had always wanted to start a family with Mar. In fact, it is something that she and her husband have worked on for several years before finally conceiving in 2018.

“I’ve always, always wanted to be a mom. Everyone who knows me well knows that I love children. But for the longest time, because my career in news took charge, I thought it would never happen. But now that it has happened at my age, and even if we had planned and started on this project years ago, I started with mixed feelings of uncertainty, worry, anxiety,” she said.

“I felt weird feeling that way. I worry about the future, about everything that could go wrong. I’m told this is normal among many expecting and new mothers. Good to know I’m not weird. It wasn’t instant with me. The joy crept up and slowly but surely took over. Now, every day is even more joyful than the day before. I’m very hopeful about the future. I have renewed energy, I don’t know how that happens, It’s adrenaline I suppose. I might be acting younger. And maybe I’ll live to be 120 years old,” she exclaimed.

Korina revealed that they had their embryos freezed “before my biological clock stopped ticking”. They were only waiting for the perfect opportunity to start a family, she said, but would always be swamped with work in their respective careers.

“After 2016, Mar and I embarked on our best life adventures. Things we’ve always wanted to do, but couldn’t because of work, we did. We didn’t think Mar would run again for office. So we both said, now is the best and only time. If we waited longer, it would be too late for us. This is also why Mar found it so difficult to decide to run again,” she said.

“But public service beckons,” she added.

Korina and Mar had the procedures done abroad. They first went to India, but with the tedious process there, they decided to consult with a facility in the US, as per the recommendation of a friend “who also had a good experience and successful surrogacy with them.”

According to Korina, she and Mar couldn’t have chosen a better surrogate.

“She wanted to help us as she had helped another couple in the past. Intelligent, compassionate, kind and responsible. Being how she is, we felt no reason to micromanage her with her food intake or activities. We wanted to respect her privacy and how she would be responsible for the children. We of course kept in touch the entire time and exchanged developments regularly,” she said.

My children and I thank you all for the super heartwarming response to the announcement of their arrival.😍😍 Kilig kami. So many wishes from friends and followers. If only they were aware right now how loved and welcome they are. Ako na ang hahalik sa kanila para sa inyo. On Rated K tomorrow night, I know I told you I would tell our whole story. Well, I will have a little of the kids...but maybe the whole story can wait until when we all get back to Manila after which sa Rated K niyo lang mapapanood ang lahat. Ok guys? Sorry about that. You might have expected kuwentuhan to the max na tayo. Meantime, love from Pittsburgh to everyone!💚👼🏼👼🏼

Currently, Korina is still in the US to wait for the papers of the twins so they could fly home as a family.

“And they have to be strong and stable enough for the long flight home. So maybe in less than a month we will be back. Mar had to leave because of the demands of the campaign but will be back before we head for home,” she said.