Music veteran Regine Velasquez has released a new series on her YouTube channel, Real Talk, where she'll invite guests to come over and discuss a certain topic together. 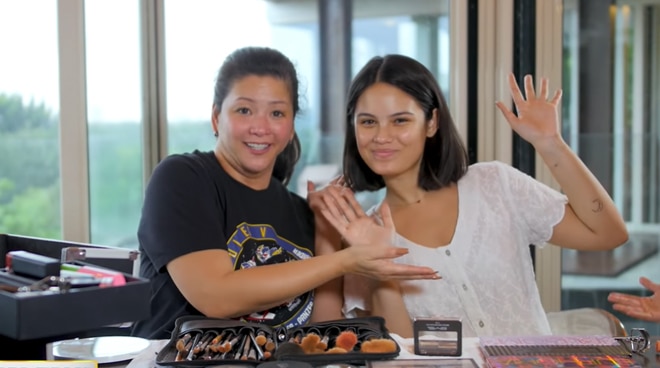 Music veteran Regine Velasquez has released a new series on her YouTube channel, Real Talk, where she'll invite guests to come over and discuss a certain topic together.

For her first episode uploaded this Wednesday, the Asia's Songbird had her stepdaughter Leila Alcasid guest on her "show" to talk about step-parenting while demonstrating their own makeup routine. The  22-year-old model and singer is the daughter of Regine's husband, Ogie Alcasid, from his first marriage to Australian beauty queen Michelle van Eimeren.

In the vlog, Leila shared her life growing up in Australia with her mother and younger sister Sarah. According to her, she was studying as a freshman in the country when she decided to leave her hometown and move to the Philippines.

Regine said that after Leila had moved in with her, her husband, and their son Nate, she really made an effort to get to know her stepdaughter because "it's what [I was] supposed to do".

"And it's also like I was already grown when I came here, so you were getting to know me as my mother... when I was already 19," said Leila, referring to her age when she decided to move back to the Philippines.

According to Regine, she didn't want to act like a mother to Leila, instead, she wanted to win her over simply by being her friend.

"Actually we had a conversation about this, eh, na ayaw kong maging nanay niya kasi meron na siyang nanay, eh. Parang she really didn't need me to be her mom kasi she already has her mom. So ang naging style ko was just to be a friend, which is easier for me and easier for her," she said.