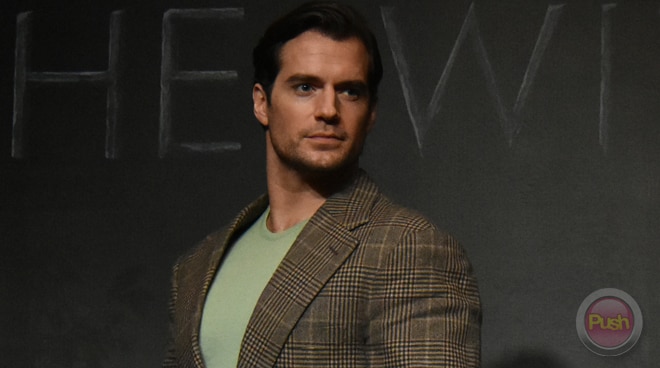 After flying in to Manila last Wednesday, December 11,  after meeting his fans in Brazil, British actor Henry Cavill shared how he first heard of The Witcher which is based on the best-selling fantasy series of books, during his Netflix presscon last December 12 in Pasay city.

“My introduction to the character first came through games. I’m a big PC gamer and I’ve loved gaming since I was a young boy. Then when I met Lauren Essich (the series showrunner) she told me there were a series of books. I knew there was a series of books but I just assumed they were based on what the games were created. Little did I know that they were written way before and that the games were based on the books. And so I got to those and fell in love with them. And I’ve been a fantasy genre [fan] since I was a little boy as well.. For me it was such a wonder to read something so new and such a fresh take on the genre,” he shared.

Even after starring in roles in movies like The Man of Steel and Mission Impossible: Fallout, Henry said he was really excited about vying for the role of solitary monster hunter Geralt who is the lead character in The Witcher. “I heard that Netflix were making it into a show and I called my agent and I said, ‘I want to at least get into the room here as early as possible and see if I can get this. This is really, really important to me. And then they said great and I didn’t hear anything back for a week.’ And so I called them that week and said, ‘Had you heard anything yet?’ They said, ‘’We put a call to Netflix and there’s nothing going on yet. We’ll keep on calling until we find what’s going on.’ So I called them back every three days. And they kept calling until Lauren set meetings and they said, ‘You have to get this guy otherwise he’s going to turn up at the door. It’ll be embarrassing.’ And so I met Lauren and we had a lovely chat about character and about the storyline. After six or seven weeks later, I got a call saying, ‘Would you like to audition for the role?’ I was on holiday at that time and I cancelled my holiday and we all flew into New York and we had an audition there and the rest is history,” he recalled.

Henry said that his childhood had prepared him for the role of Geralt growing up. “The preparation for me for Geralt was a little bit inbuilt. I’ve been a fan of the fantasy genre since I was a boy and my father would read to me before I could read and it was always fantasy genre books and every book I’ve picked up to read just or the sake of reading for enjoyment on my free time has more often than not been part of the fantasy genre. And so when I came to playing the games, I was watching and playing the games thinking, ‘How can I make this thing into a movie or TV show?’ It all happened quite naturally for me internally speaking. And then I had good fortune with Lauren who was such an open book when it came to us discussing the character and how to set the look and how we’re going to adapt it,” he said.

Even though born human, Henry’s character possesses incredibly fast speed, strength, great endurance, and a long life as well as the power to perform basic spells. “But aside from all of that, I think Geralt’s true secret power is his capacity to love and his belief in the world. The sword (he uses) was heavy yes to a degree, a perfectly balanced sword is heavy to a point but not that heavy. The trickiest thing about fighting on set with a real weight sword is that you’re not swinging through something, you’re not actually trying to kill someone or hit someone and so stopping the sword is the trickiest bit. When we do stunt fighting, especially with a lightweight sword, it is an ideal world when you don’t make contact with anyone’s hand or anything. But when you’re doing technical fighting it’s pretty much par for the course,” he added.

Mostly shot in the forests of Budapest as well as Spain, Austria, and Poland where the original story in the books were based, the story takes place in a fictional area called The Continent. During shooting, Henry did all of his scenes without any stunt double.

“Every training experience is different in every other job because the trickiest thing about training before any role is finding time to fit the training in. But for this one in particular, because of the athleticism in Geralt’s fighting style, there’s a lot of pirouettes, there’s a lot of explosive movements, and a lot of uneven ground. You’re not fighting in a gym, you’re fighting on a slope with cobbles and it’s dusty floors as well or it’s raining, whatever the case may be. And so you have to make sure that everything is protected and you build up the right muscle group which can protect things like knee joints or whatever it may be, hips, elbows, shoulders. And that was what me and my trainer focused on the most. Aside from the aesthetic, we had to make sure that my body could keep up with the schedule and the fights,” he shared.