All of Sunshine Cruz’s three daughters said they agree with the decision to use Cruz instead of Montano as their screen names. 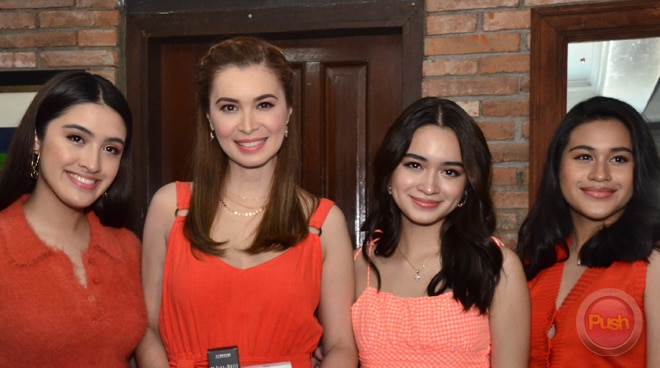 According to Sunshine, it was her manager Arnold Vegafria of ALV Talent Circuit who decided to use Cruz as her daughter’s screen names.

“‘Wag kayong magagalit sa akin ha. Desisyon ‘yan ni Arnold Vegafria,” Sunshine said in jest during her contract signing with Em-Core Dot Net where her she and her daughters were launched as the brand’s newest endorsers.

Referring to Vegafria, she asked: “Arnold, bakit daw Cruz?” She added: “Pinaalam naman ‘di ba? Kasi nga ‘yung careers nila more into singing. So we all know that the Cruzes mga musicians talaga. So I think it’s the fault of Arnold.”

Known for being musically-inclined, Sunshine said she thought that they thought it would be an advantage for her daughters to use ‘Cruz’ instead of ‘Montano’ - especially with her two daughters currently pursuing careers in the music industry.

While that is the case, Sunshine Cruz still believes that her daughters are proud of their father’s surname.

Meanwhile, Vegafria explained that he personally asked for permission from Cesar Montano to allow her daughters to use ‘Cruz’ instead of ‘Montano’ as their screen name.

The Love Thy Woman’s three daughters also said that they agree with the decision of their manager to use the surname Cruz, reiterating that it would benefit their future endeavors.

“For me, that’s why every celebrity has a stage name. It’s just a screen name, which means it’s just for the screen. It’s not a real name. I trust my mom and I trust my manager on it. And if they think that’s good, then I think it’s good as well,” Angelina said.

“Like they said, we still have Montanos name. And the Cruz - it’s just for the screen. It’s just a stage name. And we could actually benefit from it. Like my sister mentioned earlier, the Cruzes are known to be musically-inclined. And since we all want to take a more musical path in life, this could help us a lot,” Chesca stated.

Sunshine, whose ex-husband's real name back then was Cesar Manhilot, also made it clear that their surnames were already legally changed from Manhilot to Montano.

Asked if she has plans to have her and her daughters’ surnames changed in the future, she answered: “Ako papalitan ko talaga. Kasi up to now eh. Annulled na ako. Pero ang daming kailangang asikasuhin. April lang ako na-annull, papalitan ko talaga,” she said.

Angelina, for her part, said: “There’s no point. It just disrespects him. He’s still our father. It’s our last name so we’ll embrace it.”