Lea Salonga on starring in the musical ‘Sweeney Todd’: ‘It’s exciting being in this show’

Lea Salonga plays the role of the naughty and funny Mrs. Lovett in the popular Broadway musical ‘Sweeney Todd: The Demon Barber of Fleet Street.’ 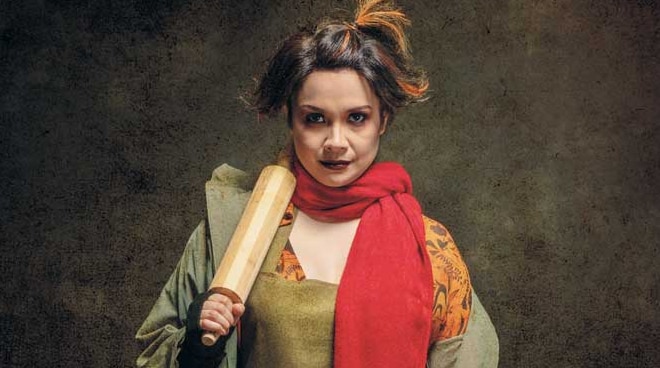 Even with local showbiz currently being dominated by romantic comedies and love teams, Lea Salonga said her heart will always be loyal to musical theater. With her current musical Sweeney Todd: The Demon Barber of Fleet Street touching on controversial topics like murder and cannibalism, Lea said it is not really a big issue. “The things about musicals is that you don’t know how they’re going to hit. Carousel is going to be produced soon or in a year and it’s something that touches on domestic abuse. There are other musicals that touch on racism. But here the cannibalism is not actually the most horrible part of this, it’s not. They can actually justify what they’re doing by saying, ‘We have to survive. It is a difficult time. Goods are expensive. I have to do this.’ But then there are other themes that are being touched upon. Like how someone in a position of such great power uses and abuses that power to get what he wants to achieve an end and how he uses his power. I think by the end of watching the show the cannibalism won’t even be the thing you’ll notice. And then you will then root for Sweeney. You’ll absolutely root for Sweeney,” she explained.

Even with Sweeney Todd having a more adult theme, Lea admitted that this show is her absolute favorite Stephen Sondheim musical. “It’s an examination of how far people can be pushed under certain circumstances. That’s one exciting part of it. It’s set in the industrial revolution. There is desperation in this era and the things that they do to survive and how they are able to justify those things. Being able to step into the shoes of someone and trying to empathize with even the most evil murderous human beings that we get to play, it kind of lends you insights and kind of makes you think that life isn’t all that black and white after all. Yes, the music is challenging and I’ve often headed home and just found myself sitting down once I get home just staring into space, my brain it’s going nonstop and trying to process all of the information. It’s so fulfilling and gratifying once you see how everything comes together and how everything fits,” she explained.

Performing alongside Jett Pangan and a talented cast of singers is something Lea is proud of. “It’s like being in a war. So all of us are in this together kumakapit bisig lahat kami with one another to the end of the rehearsal process. It’s exciting being in this show with these titans. Whether they’re brand new in the industry or have been around forever like Jett Pangan, it’s exciting singing and trying to figure out how to harmonize with his very unique voice. It’s a very unique instrument that he has and it’s like nobody has this. it’s a challenge for me to sound like it makes sense with him,” she said.

The Tony-Award winning actress said she and director Bobby Garcia handpicked Jett Pangan for the title role. “I appreciate what this actor is able to do and the emotions he is able to portray and the voice that comes out of that body, I am lucky that he is looking at me with those demented eyes. I’m extremely fortunate to get to work with him. When Bobby and I we’re trying to figure out who to cast for this, when we were having initial discussions and we both said, ‘You know what, there’s no one else that can do this but him,” she added.

Also joining her in headlining the cast are West End’s Miss Saigon alumni like Ima Castro and Gerald Santos, as well as singer Nyoy Volante. “Even in the ensemble, it is a powerhouse cast of people and wonderful human beings with great senses of humor. We laugh every single day at lunch. Even upstairs in the waiting room people are laughing. So it’s a wonderful company to be in. As big as the challenge is, you feel like the burden is shared amongst everybody, that everybody kind of helps you carry what you have to and it’s a wonderful feeling to be around a company of actors like that,” she said.

Sweeney Todd: The Demon Barber of Fleet Street will run from October 11 to 27 at the Theater at Solaire. Tickets are available online at Ticketworld.