Father of Nadine Lustre explains controversial posts: ‘People always have the tendency to hate rather than to understand’

Ulysses “Dong” Lustre, the father of Nadine Lustre, has denied alluding to Kathryn Bernardo or “anybody in particular” after being the target of bashing over his cryptic post on Facebook last week. Ulysses “Dong” Lustre, the father of Nadine Lustre, has denied alluding to Kathryn Bernardo or “anybody in particular” after being the target of bashing over his cryptic post on Facebook last week.

The post, which he shared Wednesday, sparked speculations that he was aiming at the younger actress when he mentioned the words  "high gross" in his rant, presumably describing Kathryn's recent movies, 'The Hows of Us' and 'Hello, Love, Goodbye', both of which became the highest-grossing Filipino film of all time in 2018 and 2019, respectively.

"I’m Flop and you’re High Gross, what are you afraid of. You feel so threatened, you’re desperate to break US apart," he said.

“I hope someday you get what you deserve. What comes around, goes around," he added. However, on Friday, Dong belied these rumors by stating hat he wasn't pertaining to anybody in particular when he shared the post on his Facebook account.

He said, "My posts are my personal opinion, and your comments are also yours. The sad part is people always have the tendency to HATE rater than to UNDERSTAND.

"My posts does not pertain to anybody in particular. The world 'I' means ME as the writer, 'US' means THE TWO OF US and 'YOU' is not a particular person... The words 'FLOP' and 'HIGH GROSS' pertain to two things in opposite, which I chose to use simply because I'm pertaining to the entertainment biz." 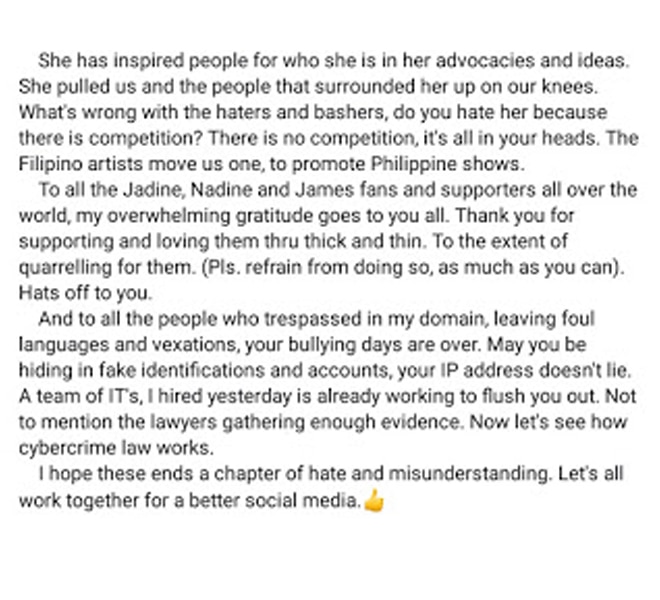 He also came to the defense of his daughter by stating that Nadine "doesn't have to prove anything to US anymore".

"From nobody to somebody. Three major awards in a year. Actress, singer, dancer, artist, and director. Sold-out concerts and multi-media endorsements. And of course, she attained it with the help of a lot of good people including her partner. Don't get me wrong AGAIN. I'm not bragging, just being proud," he said.

"She has inspired people for who she is in her advocacies and ideas. She pulled us and the people that surrounded her up on our knees. What's wrong with the haters and bashers, do you hate her becausse there is competition? There is no competition, it's all in your heads. The Filipino artists move as one, to promote Philippine shows," he added.

Dong went on to thank loyal supporters of his daughter, including fans of Nadine's popular tandem with real-life beau James Reid, for "loving them thru thick and thin, to the extent of quarreling for them".

He, however, reminded them to "refrain from doing so, as much as you can".

"And to all the people who trespassed in my domain, leaving foul languages and vexations, your bullying days are over," he continued. "May you be hiding in fake identifications and accounts, your IP address doesn't lie. A team of ITs I hired yesterday is already working to flush you out. Not to mention the lawyers gathering enough evidence. Now let's see how cybercrim law works."

Ending his statement, Dong said that he hopes to end a "chapter of hate and misunderstanding" by standing up against his bashers.

"Let's all work together for a better social media," he added.