EXCLUSIVE: X Factor UK contestant Maria Laroco on getting a standing ovation in London: ‘I was in complete shock talaga’

Maria Loroco reveals why she chose to audition with the song “Purple Rain.” 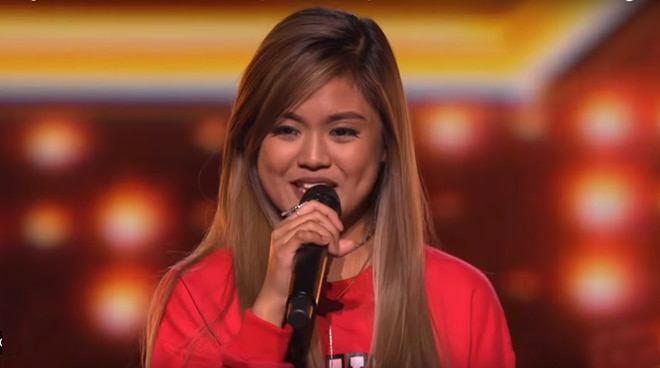 After recently getting a standing ovation from all the judges on X Factor UK, teen singer Maria Laroco talked to PUSH about her journey to finally getting on the international singing competition. “This is my third time trying to audition for X Factor. For the past two years, I never got lucky to audition sa harap ng four judges, so this year lang talaga kami talaga pinalad na mag-audition at mag-join dito sa X Factor. I’ve always wanted to be here and join the competition since 2016.”

Inspired by singers like Morissette Amon and international singer Jessie J., Maria said it was another group of talented Pinays who previously joined the show that encouraged her to join. “Mga friends ko din ang 4th Impact, kasi with them, nasabi ko sa sarili ko that, one day I’m going to be up there singing my heart out, that’s what I saidduring the audition. I’ve always wanted to do X Factor. I always listen to Ariana Grande, Dua Lipa, Jessie J, and Beyonce. My favorite song from Jessie J is ‘Who You Are’ because it means a lot to me, you should always be who you are and not anybody else, just who you are. Kay Ariana Grande naman, marami po kasi (laughs),” she explained.

The talented singer said the audition process abroad was similar to the local version. “Ang difference lang is we applied for online auditions dito, and then they sent us an email saying na I got through and they’re inviting me to audition for the producers audition. And then, after ‘nun, ‘yun na ‘yung live auditions in front of the four judges.  X Factor UK has made artists big, like One Direction, Louisa Johnson, and my idol Sam Bailey. X Factor UK has made a lot of artists big not only in the UK but in the whole world. Not in just the UK industry but to Hollywood and to different countries around the world. I chose X Factor UK dahil umaasa ako, I’m hoping na someday I can get big like them too,” she explained.

When she got a standing ovation from all the judges, Maria shared what was going through her mind. “I was actually in disbelief, kasi I couldn’t still believe until now that I got four yes-es and a standing ovation from the audience and the judges. I’m so happy talaga, beyond happy because I was given this chance to perform in front of all these big people. I was so overwhelmed and I wasn’t expecting na mapapatayo ko lahat ng mga tao and the four judges. I was in complete shock talaga, kasi pangarap ko lang ‘yun, tapos nangyari po siya. Sobrang saya ko ‘nun, hindi ko mapaliwanag ‘yung nararamdaman ko. Kaya napaiyak ako n’un,” she recalled.

Maria also shared the story behind her audition piece which was Prince’s classic hit “Purple Rain.” “May secret po tayo diyan (laughter). Prince’s ‘Purple Rain’ was not actually my first song choice, it was actually ‘Domino’ by Jessie J. But then before I performed someone approached me—I was on stage—and told me to sing “Purple Rain” instead. But that song was the version of Jessie J. And I’ve always looked up to her. She’s my idol. That song really means a lot to me now,” she revealed.