Iza responded to a rude netizen in a very kind way. 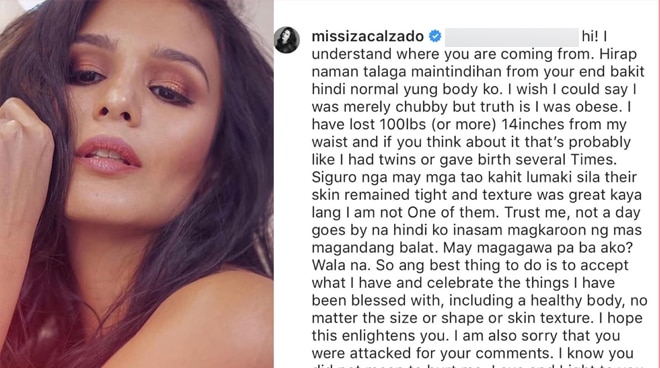 On Instagram, Kapamilya actress Iza Calzado replied to a netizen who body shamed her im a photo posted on Monday, August 27.

Though the comment has already been deleted, a Facebook user posted screenshots, capturing one of the comments. The actress opened up about being obese when she was younger.

“I wish I could say I was merely chubby but truth is I was obese, I have lost 100 lbs (or more) 14 inches from my waist and if you think about it that’s probably like I had twins or gave birth several times.

“Siguro nga may mga tao na kahit lumaki sila their skin remained tight and texture was great kaya lang I am not one of them. Trust me, not a day goes by na hindi ko inasam magkaroon ng mas magandang balat," she added.

Iza also took the chance to promote body positivity and acceptance as she continued with her comment. “May magagawa pa ba ako? Wala na. So ang best thing to do is accept what I have and celebrate the things I have been blessed with, including a healthy body, no matter the size or shape or skin texture," she said.

Happy ang proud to say that I am still a Kapamilya! Exciting times ahead! 💙

The actress also apologized to the netizen for the online attacks, “I’m also sorry that you were attacked for your comments. I know you did not mean to hurt me. Love and Light to you.”