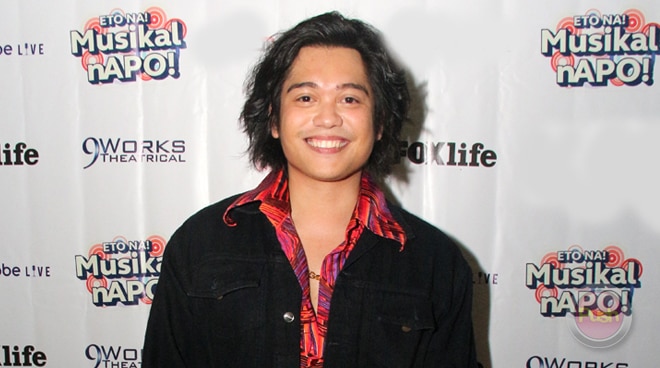 In an interview with DZMM, Jobim Javier related how his dad, APO’s Danny Javier, shared his love for music with him. “We both love music. Ever since noong bata pa kami, he would teach us to sing, to vocalize. He instilled a very deep love for music in me at a very young age.”

His love for music led him to a career as a radio DJ for Jam 88.3. He is also a professional host and voice talent. Eto na! Musikal nAPO! is actually his first musical. How amazing is it that his first stint is one that gives tribute to the iconic musical group that his dad belonged to?

“It’s so exciting! I’m over the moon,” said Jobim, who plays the character Butch, after the preview night. “When I heard that it was going to be made into a musical, I jumped at the opportunity. I knew I had to be a part of it. And now that it’s finally happening, I can’t believe that it is.”

He is paired with theater actress Sab Jose, who plays the beautiful yet taken Michelle. Unlike Jobim who is new to the theatre scene, Sab just graduated with a Master of Arts degree in Musical Theatre from the Guildford School of Acting (UK).

Jobim welcomed the opportunity to learn new things from the other members of the production. “The rest of the cast is great! They want to make me step up my game,” he shared. “This is my first time doing theatre, and my only job is to try not to be the worst in the group. I’m hoping I’m doing that.”

At the end of the day, he has simple hopes for the audience. “I hope they have a good time,” said Jobim. “I hope they take home a little bit of knowledge regarding Martial Law, a newfound appreciation for APO music.  Most importantly, I hope that they go home entertained, because that’s what we really want to do: to put on a good show.”

Watch Jobim and the rest of the cast in Eto na! Musikal nAPO! at the Maybank Performing Arts Theater in BGC from August 3-26, 2018. Tickets available at Ticketworld.