Heart Evangelista admits auditioning for ‘Crazy Rich Asians’: ‘It was just a what-if for me’ 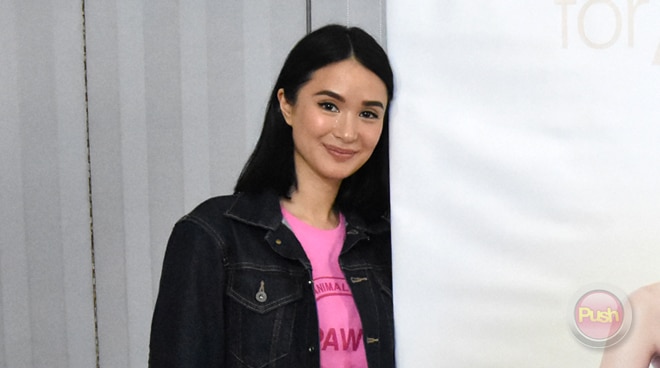 After being introduced online as one of the real-life crazy rich Asians on Harper’s Bazaar’s website, Heart Evangelista-Escudero was also presented as a celebrity advocate for responsible pet ownership. During her launch for the “A Heart for Aspins” campaign with PAWS Philippines animal shelter, the pretty actress shared which fellow celebrities own aspins or “Asong Pinoys” just like her. “A lot of them have aspins. Solenn (Heussaff) she has an aspin whose name is Pacman who is actually from me. Joey Mead also adopted a dog from Huba, Sorsogon from me also. Ngayon taga-Dasma na siya. Yung kay Solenn taga-Forbes. Everybody needs to see that it’s really not about the breed,” she explained.

During the advocacy campaign launch, Heart also admitted that she also submitted an audition tape for the movie Crazy Rich Asians last year when they were still casting for the movie. “Actually I did audition for Crazy Rich Asians. I didn’t say anything. It was just a what-if for me. That was the time I was trying to get pregnant. I just needed to get it out of my system. Although Hollywood for me is really too far of a dream, too big na hindi ko siya iniisip. But I did it, I auditioned. I hired a group to film it as a scene,” she shared.

Although she didn’t make it into the film, Heart said she is happy she got to work with the book’s author Kevin Kwan in the Harper’s Bazaar “These Are the Real Crazy Rich Asians” feature this month. “Well I was going through something. I really was scheduled to go to France for fashion week and then I also had an endorsement shoot that I was trying to move. But may dumating na pangatlo so it was a sign. I got a message from Kevin (Kwan) and then a letter also from Harper’s Bazaar and then they asked me if I was going to be in Paris for fashion week. I didn’t say no but I didn’t know if I was going to go. And then I messaged Kevin back and then sabi niya na, ‘There’s a shoot. it’s really huge. It’s good for Asians and for them to see us worldwide. I’d love you to be part of this.’ It’s really good. He so’s humble and it’s nice that somebody in Hollywood can be so nice. In fact nung sinabi nila sa akin na kasama ako dun, they asked me if I shop couture and I was going through something then so parang I wasn’t really up to it,” she recalled.

The 33-year-old artist said it took her a while to believe what was happening. “So I called Kevin and I even said, ‘Are you sure I’m what you’re looking for? I don’t think you got the right girl.’ And then he’s like, ‘You know I really appreciate that you told me this. I don’t want to paint you to be somebody you’re not. I appreciate you with your fashion and I would love to still have you on Harper’s Bazaar,’ so it really, really was a dream come true,” she said.

Her husband Chiz Escudero also played a big factor in her decision to finally accept the invitation to be featured. “Chiz was like, ‘It’s time na lumabas ka na ng bahay. Pangatlo na ito so I think it’s time for you to spread your wings.’ So then I went. Four days siya pero parang ang bilis ng pangyayari kasi parang for somebody who loves fashion, arts, couture, to watch the shows, it so inspired me na suotin mo yung mga damit that you just saw on the runway. They asked me, ‘Which dresses did you like from the show?’ and then sa shoot it was all there. I was like, ‘Wow!’ It was $40,000 and above couture so as you can see only the royals and the bourgeois only wear that. When I wore it hindi na nga ako guamagalaw kasi feeling ko baka ma-damage ko (laughs). It was funny because I was with my friends and para kaming mga bata,” she explained.

When it comes to expenses, Heart candidly shared how it usually goes for work-related trips. “Usually when it’s like that, Cathay Pacific usually flies me and my team and then everything else when I go to Milan also, usually when I do something for a brand they pay for your hotel. Siyempre yung pagkain sa ‘yo na yun (laughs),” she added.

Since being featured, Heart said a lot of good things have been coming her way. “I’m very shocked. It’s nice to see all the Filipinos from all over the world have nice things to say. It’s flattering really. It really did (open a lot of doors). I’m doing certain things. I’ll say I actually signed with Sequoia Paris; it’s a French brand. I’m also flying to New York this September, something for fashion. I was also invited to a big event to Milan and Paris again. So it’s really a blessing. And I’m very thankful that my husband’s very supportive. Sobrang suwerte ko,” she said.