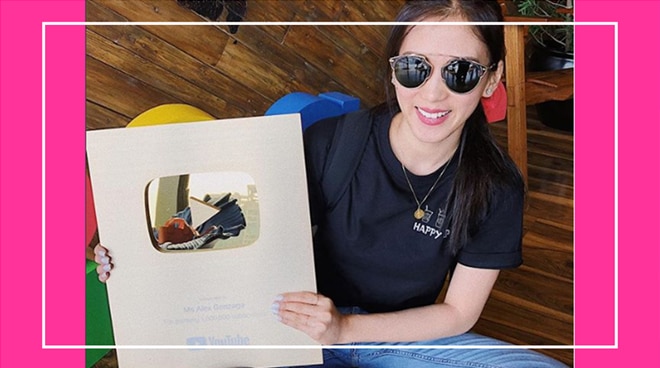 A few days after celebrating her first year as a vlogger, Kapamilya comedienne Alex Gonzaga received her Gold Play Button from YouTube after her channel gained more than a million subscribers. As of this writing, Alex’s channel has 1,467,221 subscribers.

As posted on her Instagram account, the I Can See Your Voice Sing-vestigator wrote, “Our GOLD BUTTON is here!!!!! Mabuhay ang mga netizens na may ginintuan puso nagsubscribe!”

In November of last year, the comedienne received a Silver Play Button when she reached 100,000 subscribers at the time.

Alex is also busy taping for her new movie with elder sister Toni Gonzaga and Sam Milby. The movie will be produced by Ten17 Productions and has the working title Merry Merry Me.

Did Alex Gonzaga catch Robi Domingo with his date?