EXCLUSIVE: Xian Lim joins his first reality show: ‘It was a crazy experience’

Xian Lim shares his experience behind the wheel for ‘Celebrity Car Wars’. 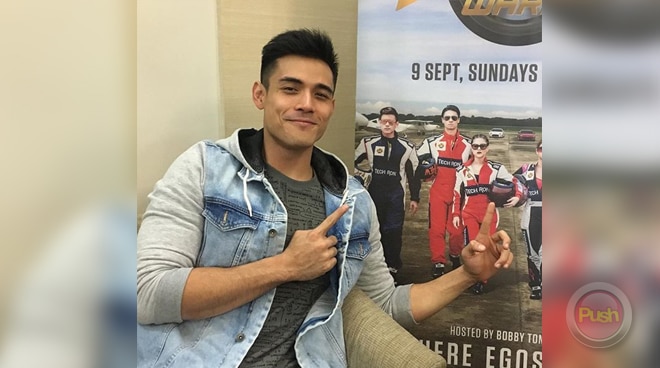 Joining the new season of Celebrity Car Wars, Xian Lim said he never expected to be part of this kind of show. “We got locked in for two weeks tapos there were people from Malaysia, Singapore, and Thailand so it was a crazy experience because out of all the guys in the group I’m like the dorkiest or the nerdiest guy. I don’t know anything about cars,” he said during the HistoryCon 2018 event held last August 10 in Pasay City.
Xian is one of the two Filipinos chosen to participate in this year’s batch of drivers. “[I] told them, ‘I just want to experience what you guys do here. It’s so exciting. I saw the first and the second season of the show and it’s really different because you get to break a lot of things (laughs). I think this show has a lot of budget. So we had a lot of really expensive cars. We want you guys to see the destruction. Basically I was so confused with what I was doing (laughs) so it’s going to be really, really exciting. We’re just very grateful and I’m so glad and I’m sure Diego (Loyzaga) is also very glad we’re here,” he said.
Xian’s first experience as a driver was during his freshmen year in high school while growing up in the States. “I started driving at 15. That’s the legal age 15 and a half. My mom got me my first ever car which was a beat up 1992 Nissan Sentra with an automatic seatbelt and I felt it was one of the most exciting things to happen in my life. Parang first time to be behind the wheel and learning everything for the stop signs to changing lanes. Pinaka-una kong fender bender was changing lanes and tumama ako sa kotse na katabi. I was scared and I was 16. I was freaking out kasi siyempre yung insurance and getting information,” he shared.
The Celebrity Car Wars driver was also proud that he passed the driver’s test on the first try. “Ang hina ko kasi sa test and even nung bata pa ako palagi bokya and when it was the day of the test my mom was like, ‘O Xian don’t expect ha? Kasi people usually do fail the first time.’ Tapos nung nakuha namin yung result, pasado and I got a lot of things correct. It was an amazing feeling,” he said.
After he moved to the Philippines, Xian said he had to make a major adjustment when it came to driving as well. “Ang hirap! Ang masasabi ko lang, lakas ng loob dito sa Pilipinas. It’s more of stoplights and signs are suggestions? (laughs) But being responsible and being a defensive driver lagi dito sa Pilipinas, never ka mag-da-drive na mainit ulo mo. Always try to stay awake and have that safety bubble palagi. Mabagal ako magpatakbo (laughs),” he added.
Xian Lim Celebrity Car Wars