EXCLUSIVE: Diego Loyzaga on his driving style: ‘I’m not a defensive driver’ 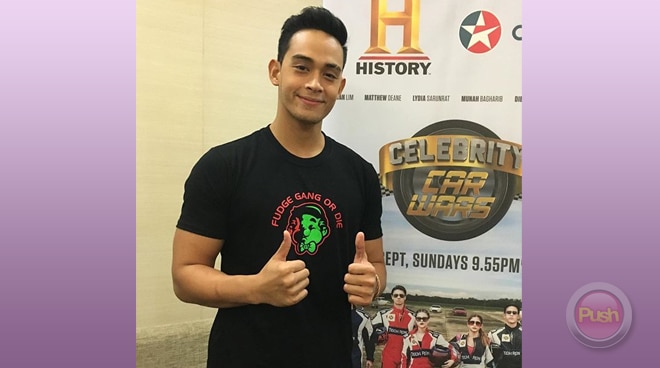 After coming in top of his class in a recent street car racing event, Diego Loyzaga said he could not have asked for a better follow-up than being invited to be part of the new season of Celebrity Car Wars under the History Channel. “Two months ago I was just sitting in my bed watching History Channel and I was standing on stage just this morning with stars you see on History Channel everyday. So just the fact that I’m here is enough. This is a monumental day for me and I’m not here to try to impress or overdo somebody. I’m just here to enjoy the event. I’m going to enjoy the experience and just be happy and honored to be here. Game talaga ako whatever it is that has to do with cars. I didn’t actually completely know everything that we were going to be doing,” he shared during the History Con 2018 presscon last August 10 in Pasay City.

The 23-year-old actor said that after shooting for the show, he was able to know himself better behind the wheel. “Dito ko ma-sho-showcase if I really have the capability to be a good driver or if I have car knowledge, if I have the potential to someday be something bigger in the car world. It was exactly what I wanted it to be. Yun na lang yun. My limits were tested. And now I know where I’m good and where I can improve,” he said.

After he got his first car from his dad Cesar Montano at the age of 16, Diego said he never stopped driving. “My first car was a Honda City ’03. It was barely together, parang ganun. It was a banged up car. It was a car that my dad got me here. Manual kagad. I always would choose na ako mag-da-drive kesa sa driver ko. Naka-student permit pa lang ako nun. But I’d always choose na ako mag-drive. I want to say na up to this day hindi pa ako nagkakaroon ng accident pero that’s not true because just recently may accident but it’s not worth making kuwento,” he shared.

Unlike other drivers who prefer to be defensive, Diego said he wants to drive more efficiently when possible. “I’m not a defensive driver. I don’t want to say aggressive. Napaka-traffic na sa Pilipinas and kung babagalan mo yung takbo mo even though wala namang kotse sa harapan mo and we’re on EDSA, bilisan mo naman. We got to get places. It’s traffic enough and there are only some days and some times dahil holiday or for whatever reason that it’s not that traffic. I hate Sunday drivers. If you’re going to be in front of me and you’re going to be slow I’m going to overtake you sorry,” he explained.

Having to go through everyday traffic in Metro Manila, Diego shared his advice for those dealing with road rage. “What did I learn from the show? It’s to be patient. That is the best advice you can give kasi whether you like it or not, you’re going to face the rush hour, you’re going to face the traffic, you’re going to face the bumper-to-bumper, all you see is yung hilera ng tail lights from Magallanes all the way to San Juan sa Guadalupe part. That’s the reality we live in. Sp put on the radio and listen to some music that will calm you down. Just relax. There’s no point switching lanes all the time. it just causes more traffic. So for people who have to face everyday traffic, try and find your inner peace and just calm yourself and eventually makakarating ka din sa bahay,” he shared.

The 23-year-old actor said if given the chance he would want to also pursue a career in racing. “Definitely. If the opportunity presented itself and says, ‘Oy pare, I’ll sponsor you. Can you drive for us?’ Yes. Hindi mo na kailangan tanungin. Automatic yes definitely,” he adds.