DNA not required: Eight celebrity moms who believe family is more than blood

They may not be related biologically, but these celebrities openly embraced other’s children as if they were their own. 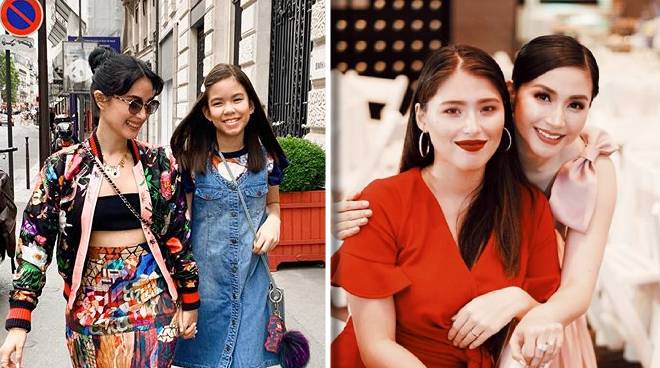 When Priscilla Mereilles married John Estrada, he was already a father to four children from his previous marriage to Janice De Belen. “Their kids are well-educated and kind. We sometimes go out of town and have dinner,” Priscilla said of John’s children Ina, Moira, Yuan and Kyla.

John and Priscilla also have a daughter together named Anechka.

It was because of Senator Miriam Defensor-Santiago that Heart Evangelista met Senator Chiz Escudero. Although Chiz is a bit older than Heart and is previously married with two kids, this didn’t stop the romance from blossoming between them. Their relationship became controversial because of Heart’s parents but on Chiz’ side, his kids understand their situation and has welcomed Heart into the family. The former beauty queen has always been open about her relationship with Luigi Muhlach, Aga’s son from his previous relationship with Janice De Belen. Charlene is very close to Luigi and his wife Patty and during her 37th birthday on The Buzz, Luigi gave this message to her, “Happy birthday. Thank you for always being here for me, for Patty, for Leandro. I just wish you the best.”

Together, Aga and Charlene have twins – Andres and Atasha.

When Assunta De Rossi married Negros Occidental Congressman Jules Ledesma in 2002, she instantly became a mother to his two children. Jules was a widower and his kids have grown up with Assunta by their side.

Just this month, Assunta revealed that she is three months pregnant with their first child.

Mariel Rodriguez knew all too well she’d be a mother to Robin Padilla’s four children from his previous marriage to Liezel Sycangco. Mariel has become good friends with Queenie, Kylie, Zhen-Zhen and Ali.

In the past, Mariel even became the ‘bridge’ that reunited Kylie and her husband-to-be Aljur Abrenica with the Padilla family.

thank you Kylie for coming we know you are so busy with Encatandia. thank you for your time.💕 my baby will have an awesome ate to look up to! 💕 #BabyPadillaGenderReveal #MarielLovesAprica

When broadcast journalist Korina Sanchez married Mar Roxas in 2009, he already had a teenage son, Paolo.

Korina and Mar also now have children of their own – twins Pepe and Pilar.

Ai-Ai delas Alas and Jiro Manio worked together in the film Tanging Ina and since then the comedienne had treated Jiro like her own son. Years back when Jiro was found loitering at the Ninoy Aquino International Airport, Ai-Ai was one of the first people who came to the rescue and helped him. She also put him in a drug rehabilitation center.

Regine Velasquez has a smooth relationship with Ogie Alcasid’s daughters with his former wife Michelle van Eimeren, Leila and Sarah. When Leila decided to move back to the Philippines and pursue a career in showbiz, Regine has been very supportive and helps her whenever she’s free. The Asia’s Songbird even defended Leila from bashers when she was just starting in showbiz. Leila and Sarah are also close to their brother, Regine and Ogie’s son Nate.