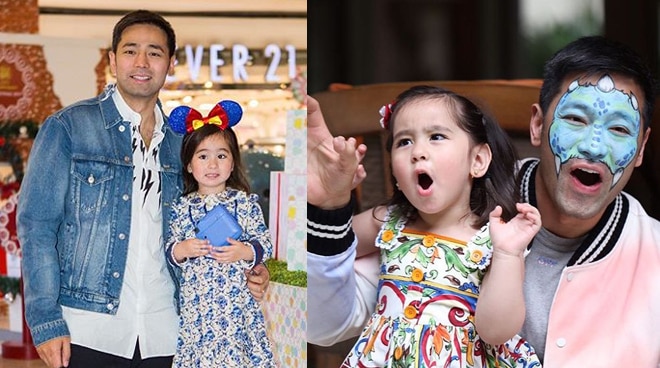 Hayden Kho was not shy to admit he is a very hands-on dad to daughter Scarlet Snow who was just launched as the newest endorser of Red Ribbon. Hayden said the toddler enjoyed making the commercial for the local brand. “It took us two half-days of four hours each. One afternoon and one morning and that’s about it. She definitely enjoyed including all the chocolate cakes. It was the part after the shoot where you have to explain to the child what that meant di ba na why she was smiling, acting, laughing, and the concept of acting. Fortunately, this girl gets it. She saw the camera and saw the commercial. She knows it’s for the commercial. So hindi na masyado kailangan ng explanation,” he shared during Scarlet Snow’s Red Ribbon launch held last March 2 in Ortigas.

With his daughter now three years old, Hayden admitted he was already worrying about a lot of things even before she arrived. So he prepared by making sure no one would steal her name online. “Before Scarlet was born medyo paranoid and skeptic ako, very protective. So what I did was I reserved all the names like Scarlet Snow and Scarlet Snow Belo on social media accounts that are popular like Instagram, Twitter, Facebook, YouTube, and pati yung mga emails kinuha ko na yung mga names just to protect her from identity theft. Kasi I know of a child who became a star and the little boy didn’t have his own social media account pero he became popular. But someone else opened an account for him and then may mga pictures and mga posts and then this account started getting gifts and donations, started selling ads and then it’s not the real person so I didn’t want that to happen to Scarlet so I just wanted to protect her,” he explained.

Hayden said he and wife Vicki Belo initially never intended to make their daughter an online personality. “With no plans naman to open the (Instagram) account until she’s aware that there is social media [that] exists, but when Vicki accidentally announced on CNN that she was born and that she’s here and we have a baby, I thought that I’ll take control na kesa ibang tao mag-gawa ng bagong account and yun yung akala ng mga tao na tunay na account so ako na lang. Might as well take control. But what I realize about social media is that it’s not going to go away. It’s here to stay. The question is what kind of message will you put out through your social media? Scarlet eventually at 11 or 12 or 13 she’ll start asking. For us we decided that we’re only going to post about faith, family, friendship, all positive stuff, compassion, love, tenderness, and all that,” he said.